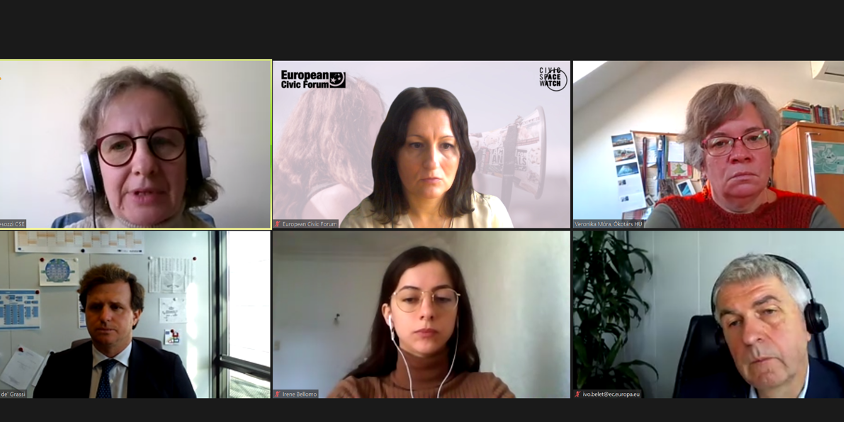 The European Civic Forum and Civil Society Europe met with the cabinet of Commission Vice-President Šuica on 28 September to discuss prospects for a civil society strategy and civic participation in policy making. The meeting was organised as a follow-up to the Conference on the Future of Europe and a letter sent to Commission President von der Leyen in June this year, endorsed by nearly 350 CSOs from across Europe, which called on the European Commission to include a proposal for a European Civil Society Strategy in the 2023 work programme.

We believe a civil society strategy is needed in order to (1) Empower civil society as a key democratic and societal actor for the European Union through political recognition and enabling policies at national and EU level; (2) Engage in regular, transparent and meaningful civil dialogue throughout law- and policy-making alongside the provisions of art. 11 TEU; (3) Support and nurture the civic sector through flexible funding policies and more; (4) Protect and defend civil society and human rights defenders (HRDs) against smear campaigns, SLAPPs, threats and attacks.

However, despite the great emphasis that the Commission President placed on defending democracy in her State of the Union address, including the announcement of a Defence of Democracy Package, the letter of intent sent to the President of the European Parliament and the Czech Prime Minister does not mention any initiative to strengthen the role of civil society in Europe.

At the meeting, ECF and CSE discussed the importance of defending European democracy not only from external threats and interference, but also from the challenges faced inside the Union. These include the rise of illiberalism and reactionary populism and the shrinking of civic and democratic spaces, as well as the constant erosion of living standards across Europe for a great part of the population that risks damaging trust in institutions, democracy and a common future based on European values like solidarity, equality and inclusion.

We are ready to work with the EU institutions to widen the scope of the Defence of Democracy Package and make sure it reflects these aspects and proposes measures to address them, but also includes civil society in its preparation and implementation.

Edito – EU institutions and strengthening civic space: Giving with one hand and taking with the other?
2 novembre 2022