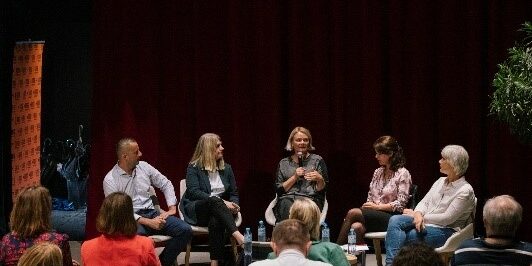 On International Day of Democracy, September 15th, activists and friends of the civil society organisation Gong celebrated the first 25 years of the organisation’s work with a gathering in the Urania Hall in Zagreb.

On International Day of Democracy, September 15th, activists and friends of the civil society organisation Gong celebrated the first 25 years of its work with a gathering in the Urania Hall in Zagreb.

‘Gong has changed over the past 25 years, but we have never deviated from the promotion of liberal democracy in Croatia and the EU’, the speakers pointed out.

For a quarter of a century, we have been asking for more transparency, more participation by women citizens, more institutional responsibility, a greater space for democratic decision-making with firm protection of human and civil rights and freedoms, while strengthening the voices of citizens, was the message from the panel discussion about the past and future of the CSO.

In addition to the Executive Director Oriana Ivković Novokmet, the President of Gong’s Council Berto Šalaj, Suzana Jašić, Dario Čepo, Sandra Pernar, Dragan Zelić and Dražen Hoffmann spoke about everything that happened to them and what still awaiting Gong, joined by Sara Lalić from Centre for Peace Studies, Enes Ćerimagić from Zelena akcija/Friends of the Earth Croatia and Igor Vidačak, former head of the Government Office for Cooperation with CSOs.

‘I have always seen Gong as the guardian of liberal democracy, which may sound as a dull prospect, but it is the best out of all political regimes at our disposal’ said Berto Šalaj, emphasizing that Gong as a civil society organization has tried to reach two targets: the development of democratic political culture on the one hand, and the development of democratic institutions on the other.

‘As most citizens know, Gong – which used to be an acronym for Građani Organizirano Nadgledaju Glasanje (Citizens Organized to Oversee Elections) – was founded with the aim of observing elections, and later focused on electoral legislation, referenda and other institutions that are important for modern democracy,’ Šalaj pointed out, emphasizing that certain developments are visible in the democratic process, such as the public discussion about the new Referendum Law, and the parliamentary debate about the change of electoral constituencies.

Executive Director Oriana Ivković Novokmet noted that a lot has been achieved in the past 25 years of work.

‘We have a lot of work ahead of us in improving democracy, with constituencies being a very important topic, considering the election cycles that await us in the next two years. If the constituencies are not amended, we will face unconstitutional parliamentary elections,’ she said, emphasizing that in the coming period, she expects inflammatory political campaigns targeting civil society as a whole.

‘The fight against corruption remains our mission because corruption in Croatia is a tool for maintaining power. Also, work on citizen participation is important because only active citizens can change society for the better. Mobilization and participation connect all topics. If there are none, all of Gong’s solutions remain in a narrow circle of stakeholders’ she concluded.