The European Civic Forum (ECF) is a transnational network that brings together over 100 associations and NGOs across 27 countries in Europe, actively working on issues such as citizenship education, defence of Human Rights and the advocacy of Democracy.

Built essentially around an economic dimension, the European project lacks of the pillars enshrined in the Treaties – Solidarity and Democracy – to be able to overcome the wide gap between citizens and European institutions. Associations and NGOs play a crucial role in this civic ownership. Associations provide an ideal environment for debate and the formulation of projects which respond to citizens’ aspirations. They are fulfilling an important function, strengthening the ties in a community life, promoting inclusion and social innovation. Associations also are spokespersons of citizens’ aspirations for equality, solidarity and democracy. Thus, they are a key factor in building, assisting and monitoring public policies, but they also make sure that decisions made by institutions reflect as much as possible citizens’ concerns. An associative participation recognised by institutions at the European level can bring back enthusiasm for building a Europe of social justice, a Europe ensuring an access to education and culture for all, which would be a leading example in the defence of Human Rights and of cultural diversity. This vision of the relations between citizens, associations and institutions is precisely at the core of European Civic Forum’s action, since its creation in 2005.

THE EUROPEAN CIVIC FORUM is committed towards the emergence of a genuine European civil dialogue,which is a prerequisite for a popular ownership of European subjects. This dialogue should be based upon the values of equality, solidarity and democracy, affirmed in the European Treaties and it should be anchored in the very functioning of the institutions. 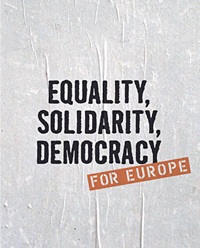 Civil society organisations bringing people together can unlock a great potential to redefine our social contract for a Europe of Equality, Solidarity and Democracy

The European Union is facing a growing popular disenchantment since the deepening of the economic and social crisis, which emerged in 2010. A belief in the ability of the European project to promote and secure collective well-being has been fractured. There is a strengthening feeling of being left aside when hit by the crisis. Decisions made at the European level to face it seem as they have been imposed by the economically strongest countries. Values of equality, solidarity and democracy promoted by the European project are seriously undermined by the European institutions themselves. Rising regressive populism rises throughout Europe and fuels xenophobic and racist views and attitudes, but also measures excluding the most deprived communities or those who seem different. On the other hand, we are witnessing extraordinary citizens’ mobilisations, which tend to leave no one alone in the crisis, to ensure access to Fundamental Rights for all those who are living on European Union’s territory. ECF action is clearly and strongly going in the direction of inclusive solidarity.

In order to rebuild the capacity of the european project to offer to citizens the frame of a shared future and to fight against identitarian closure regressive and agressive, ECF joins in the debate. For this purpose, European Civic Forum acts with three main key goals in three directions is that some :

Reinforce citizens’ engagement with their associations and movements, for an egalitarian Europe of solidarity and democracy by ensuring access for all.

Help in structuring associative movement in its European perspective through networking, common reflection and promotion of citizens’ active engagement.

We work towards the full recognition of the voice of organised civil society by  the institutions, through the implementation of a genuine European civil dialogue.

These three goals are reflecting European Civic Forum (ECF) maturation over the years. This is an approach which considers associations and NGO as separate and complementary actors of political and union movement organisations. It is addressed to all actors which intervention is necessary to strengthen democracy, but also the sense of belonging to a common cause and to shared concerns.

Many citizens acting to stake claims their demandes of an inclusive, egalitarian society which responds to diversity aspiration. Associative movement make available for these goals it’s experience, it’s understanding of obstacles to overcome and opportunities to take, build in time. For their part, institutions have central responsabilities for citizen to be totally involved in a society which spreading values claimed by treaties.

European Civic Forum connection with citizens’ mobilisations is done essentially via the activities from its member organisations, which are at the heart of the issues to be solved. Popular education, migrants’ rights, personal data protection, the recognition of their demands by national and local institutions: these are the daily activities of our members.