PARIS: the days after 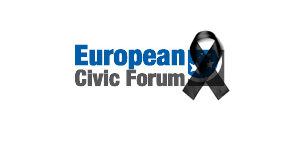 Last Friday, after Beirut, Ankara, the Russian plane flying over the Sinai, Paris, the city where the European Civic Forum headquarter is based, has been hit by terrorist attacks.

Since then, in France as also all over Europe and the world, people are gathering together to express their mourning, sadness, solidarity. Since then, much has been written and said.

In France, many associations have taken a public stance to reaffirm the values we believe in. They grasped the urgency to oppose terror by reiterating the power of living in an open and diverse society characterised by solidarity and a cherished wish of “living together”: precisely the very society that has been hit by bullets.

Those associations think that the sole proposal of “returning war for war” can only lead to a dead-end, to the very end of the society based on the values we cherish.

European leaders linking terror in Paris with the welcome in Europe of the refugees who flee war and escape from death in the Mediterranean Sea is the achievement of our main fear: a political “offer” guided by the wars between religions, the civil wars, the wars between all against all.

The European Civic Forum is willing to engage with the associations sharing the values of Equality, Solidarity, Inclusiveness and Democracy in Europe in order to propose a shared public expression towards the citizens who live in our continent and beyond. A common address which put some reason in the public debate and strength for the ideals which drive our action.

(you can download the statement in PDF format here).