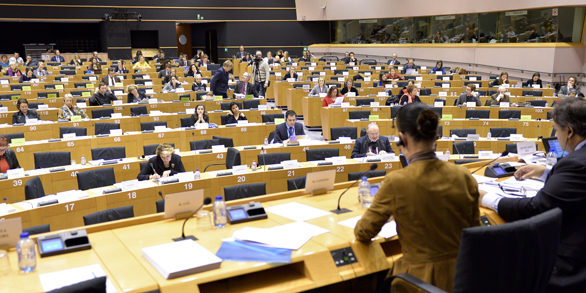 On 10 July 2019, the European People’s Party (EPP) decided to nominate Mr. Balázs Hidvéghi, elected in Hungary under the Fidesz header, for the role of Vice-Chair of the Committee on civil liberties, justice and home affairs of the European Parliament. While the Chair and three Vice-chairs of the Committee were successfully elected, the decision regarding Mr. Hidvéghi’s application for the remaining Vice-Chair position was postponed.

Mr. Hidvéghi was one of the chief communicators under Mr. Orban’s government in the past years. He has been particularly vocal during public smear campaigns in Hungary, specifically targeting political opposition, civic NGOs and critical journalists.

Having also in mind the suspension of the Fidesz membership from EPP in the run-up to EU elections, the undersigned Civil Society Organisations regret the choice made by the EPP group.

The reintroduction of Fidesz following the elections, and the appointment of one of its members as Vice-Chair of the Committee in charge of defending civil liberties across the European Union ring an alarm bell.

EPP knows that for years and until now, the Fidesz government limits civic rights, including freedom of assembly and association, freedom of speech and of academic work, as well as it restricted the rule of law in the country. Civil Society Organisations in Hungary have faced pressure, public smear campaigns, restrictive legislation and cuts in funding from the government on partisan political ground. Fidesz has been vocal in relaying the campaigns, including at the European level. A procedure of breaching the Rule of Law according to Article 7 TEU is also underway.

All these facts are contradictory to the very objective of the work of the LIBE committee. They lead not to entrust one of its representatives as Vice-Chair of its committee.

In order not to undermine trust between the EPP group and Civil Society Organisations, we are calling upon the group to review their choice and to suggest a candidate whose record shows an open and transparent dialogue with civil society organisations and a strong commitment to democracy, rule of law, Human rights for all.

To conclude, we are expressing our gratitude to the members of the LIBE committee who have postponed the appointment of a Vice-Chair. We wish the LIBE committee be provided with a new nomination that is acceptable for all those who take the mandate of this Committee seriously.

Vaccines for all, Refugees Football Club: the latest news from
the Greek Forum of Refugees
15 novembre 2021
Aller en haut