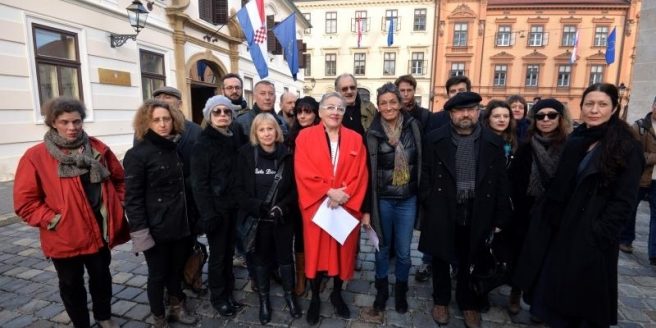 ECF member GONG (based in Zagreb) closely follows the situation of government’s attacks on civil society, the media and culture in the country. Below is their latest update.

Since assuming office on January 22, 2016 the vice-president of the Croatian Government, Tomislav Karamarko, president of HDZ and the leader of the ruling coalition in Croatia, has been putting into action his plan, announced during the election campaign, to silence all dissenting voices in the country, in line with his statement that citizens “would be free to think their minds within their own four walls, yet not in the public sphere”. At the same occasion he promulgated the concept of national identity to be adhered to by all citizens: “They will have to respect the values on which the Croatian state is founded – Homeland War, our war veterans and all killed, the political doctrine of dr. Franjo Tuđman and the great deed of Gojko Šušak.”[1]  A renowned revisionist historian, Zlatko Hasanbegović, in the position of Minister of Culture has been specifically mandated to do so, and is carrying out this assignment zealously. The Minister’s harmful interventions continue despite recent rhetorical retreat on part of Karamarko, upon strong international criticisms related to the commemoration of Jasenovac boycotted by key representatives of the Jewish and Serbian minority, as a reaction to the Government’s toleration (if not even implicit endorsement) of rising pro-fascist rhetoric and aggression against national minorities  in the public space[2].

The attack on non-profit media by the Minister of Culture started only five days after he assumed office, with the dissolution of the Commission for Non-profit Media that was in charge of the Ministry’s grant-making and oversight of grantees in the non-profit media sector. At present, it is the Minister himself that is reviewing and approving requests for reallocations of non-profit media projects still underway, based on contracts signed last year, which is yet another opportunity for blocking existent financing of non-profit media. What followed in February and March was complete cutting of funds for non-profit media from the State Budget for 2016 and beyond, including the disappearance of the budget line for non-profit media already planned as part of the European Social Fund Operational Program for 2016.

Simultaneously with the attack on non-profit media, rapid changes of leadership and editors on public television and radio have taken place, as well as an unprecedented march on the Agency and Council for Electronic Media, organized by pro-Government war veterans and attended by deputy speaker of the Parliament Ivan Tepeš, where pro-fascist and xenophobic insults were shouted, demanding resignation from the Council’s chair Mirjana Rakić. The aggressive rally was not sanctioned by the Government. Rather, the Minister of Culture had proposed and the Government adopted and sent to Parliament the proposal to dismiss the entire Council for Electronic Media. This was the reason for public statement expressing concern issued by OSCE’s representative for freedom of the media[3]. The Parliament’s review of the Council’s report and action related to the Government’s proposal and appointment of the new Chair are pending.

The National Foundation for Civil Society Development, the only public institution providing institutional support to CSOs as well as CSO platforms, support centers and community foundations is facing a 70% cut in its funding from lottery sources. Namely, each year, since 2004, the Government adopts a Regulation on the Criteria for Defining Beneficiaries and Mode of Distribution of Revenues from Lottery Sources.  So far, the National Foundation has annually received approximately 14% of these revenues. In the 2016 budget, the National Foundation’s budget was increased by 5% in comparison to the previous year, with projections of significant increases in 2017 and 2018, primarily in relation to expected dynamics of co-financing and bridging funds for CSO projects funded from EU structural funds (ESF).

However, less than a month after the Parliament adopted the State Budget, the Government issued a Proposal of the Regulation for 2016, whereby the percentage earmarked for the National Foundation was cut to only 4,41%. In absolute figures this amounts to 30 million HRK (4 million EUR) less funding.  The proposal was prepared and suddenly introduced into procedure without prior consultations at the level of the Government’s Council for Civil Society Development – the inter-sectoral body specifically designed for dialogue on civil-society-related policy development.

This campaign is spearheaded by the leader of a marginal ultra-conservative party Ladislav Ilčić – a partner in the ruling coalition, and the leader of the homophobic referendum In the Name of Family, Željka Markić, who is also closely related to Minister Hasanbegović. On the basis of ideological differences, they are targeting the National Foundation as it has, among others, also disbursed grants to pro-democratic CSOs gathered around Platform 112, who were amongst the loudest opponents of the homophobic referendum campaign and the attempts to introduce an ultra-conservative abstinence-based sexual education into the formal education system.

In their attempt to silence those organizations, they are willing to destroy the entire infrastructure for civil society development, including program and institutional funding that is currently disbursed among CSOs supporting vulnerable social groups (44% for persons with disabilities, war veterans, children, social and health service providers); 21% for CSOs active in education, youth and culture;  10% for CSOs working on environmental protection, sustainable development and social economy and 16% for CSOs promoting democracy and human rights. It is noteworthy that only 7% of the Foundation’s grants is allocated to CSOs and coalitions targeted by minister Hasanbegović and the neo-conservatives – primarily Platform 112, Antifascist League, GONG, Center for Peace Studies, Documenta, CESI and LGBT organizations.

Due to the public protest and lobbying on part of CSOs (targeting Government junior coalition partner MOST), the adoption of the Regulation for 2016 was removed from the agenda of the Government’s session on April 6, while the session of the Council for Civil Society Development was summoned for April 22 at which a new version of the Regulation was presented with moderate rise of 7% of funds allocation for the National Foundation for Civil Society Development, due to  a compromise between HDZ and its junior coalition partner MOST. The allocation is still only a half of the National Foundation’s original lottery revenue, envisioned in the State Budget 2016, putting in serious jeopardy the total annual programming of the Foundation. While the Council session was underway, the Government held a telephone session at which this very Regulation was adopted, literally behind the back of the Council for Civil Society Development, without any notice or explanation. That resulted in immediate resignations of five members of the Council, including the President, representing civil society organisations from sectors of youth, culture, social services, democracy and human rights and environmental protection. Such brutal violation of the democratic procedure is a clear sign of the Government’s ignorance of civil dialogue, as a fundamental  principle of state-civil society relations that have been carefully developed over the past 15 years of Croatia’s democratisation.

Further attacks on the institutional set-up for inter-sectoral cooperation are expected in the form of change of leadership in the Government’s Office for CSOs, the director and the composition of the Board of the National Foundation (Government appointees pending) and the composition as well as the procedure for appointing CSO members to the Government’s Council for Civil Society Development (thus far, they were appointed through sectoral elections, without Government interference).  In the worst-case scenario, significant legislative changes and re-programming of the EU funds are likely, to shift lottery and EU funds towards government agencies and exercise direct political control over National Foundation and Government Office for NGOs.

The Kultura Nova Foundation was established as a public foundation in 2011 in order to support CSOs working on contemporary arts and culture. It represents an innovation in the governance design enabling structured dialogue and participation of artists and activists in defining program priorities of the Foundation. Over the past 4 years Kultura Nova has demonstrated outstanding efficiency and transparency and has turned into a vital source of not only funding but also program development support to the entire non-institutional cultural scene in Croatia and its international partners.

In terms of the governing bodies, the Law stipulates that the Foundation has a Managing Board (5 members) and a Director. Both are appointed to a 4 year mandate. The Board is appointed after a public call issued by the Director and open to representatives of CSOs working in the field of culture and prominent public persons and experts with experience in CSO development. After the Call, the Director compiles a list of applicants, submits it to the Minister of Culture who creates a list of proposed candidates and seeks approval from the Government. The Director is appointed by the Board.

For more than three months now, the Foundation does not have a functioning Board, since the mandate of the members appointed in January 2012 has expired. Despite the timely public call for Board Members issued by the Foundation’s director in September 2015, the new Board was not appointed by the former Minister of Culture, due to the dissolution of Government.  Again, only a few days after assuming office, on January 27 Minister Hasanbegović sent a memo to the Foundation’s director ordering her to annul the call issued in September and to issue a new call urgently.

The second call for Board Members was announced on February 3. All 31 applications were forwarded to minister Hasanbegović. On April 8th, the Foundation received a memo from the Ministry of Culture informing, the Foundation that the minister had not defined a list of proposed 5 members of the Board and that the Foundation is to issue an urgent third call for applications. This call was issued on April 15 and will end on April 30. At the same time, the Foundation Director’s mandate will expire on April 30, resulting in the complete stalling of all activities of the Foundation since the Foundation will not have either of its two managing bodies – the Board and the Director.  In such cases, the law stipulates that the Ministry of Administration appoints a Commissioner until the Foundation’s governance bodies are appointed.  It is also worth mentioning that the budget for Kultura Nova for 2016 is only some 9 million HRK (1,2 million EUR), and the procedural stalling is a tactic for bringing the institution down through attrition, with immediate negative effects on the continuity of independent, non-institutional cultural production throughout Croatia.