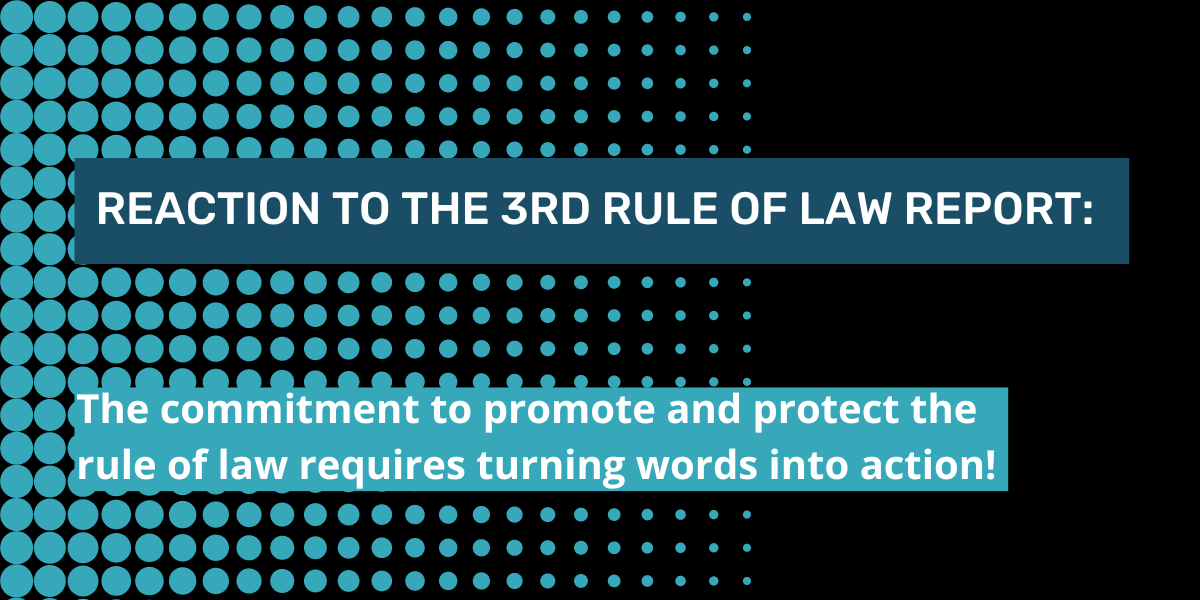 On 13 July 2022, the European Commission published its third annual report reviewing the rule of law infrastructure and developments in 27 Member States in 2021. The European Civic Forum took part in the consultation process by showcasing concrete examples of how civil society strengthens and defends functioning of the rule of law. Our submission also brought light to positive and negative developments affecting the enabling environment for civil society in fifteen countries.

We have provided concrete recommendations on how to strengthen the process and follow up. Our concerns and demands have been shared and voiced also in partnership with other civic actors and by academics. These recommendations remain urgent and relevant as the 2022 report still shows previously stated weaknesses in its analysis, in particular lack of context and overly vague language. The European Commission fails to take into account the chilling effect that restrictive laws and other repressive measures can have even in case of lack of implementation.

Despite some improvement in the scope and analysis, such as the inclusion of the implementation of rulings by the European Court of Justice, to date the European rule of law report is still not a mature tool. The European Civic Forum remains committed to work with the European Commission to strengthen the tool.

The European Commission must be more coherent and relevant in its role as protector of the Treaties, not just of the single market

The limitations of the rule of law review are probably best presented in the report’s conclusions which reads as follows: “The rule of law is fundamental to a stable, resilient, fair and democratic political, economic and social environment across the EU. It is essential to a well-functioning Single Market and to the Union as a whole. It is also a reflection of Europeans’ aspirations and values, enshrined in Article 2 of the Treaty. The Commission is committed to protect and promote the rule of law, as guarantor of the EU Treaties and of the primacy of EU law. …”

Indeed, the European Commission looks at the rule of law through the lenses of “a well-functioning Single Market”, as expressed in each of the yearly reports. Sticking to the operational responsibilities of the Commission resulting from the Treaty, this approach underpins all actions undertaken by the European Commission in the field of democracy and fundamental rights. This is also exemplified by the number of infringement procedures in the area of the internal market which still outnumbers all other areas of action in the last decade.

With regards to the annual rule of law review, if the European Commission wants to be a relevant institution analysing and providing recommendations in Rule of Law matters, this limited scope is not relevant nor coherent. The rule of law cannot be tackled with a “pick and choose” approach focusing on those pillars of the rule of law that directly affect the functioning of the market, such as corruption and judicial independence, and dealing superficially with all other areas covered by Article 2 of the Treaty. As human rights, rule of law components are interrelated and indivisible: the rule of law ecosystem must be considered as a whole, any shortcoming or breach in one area is detrimental to the overall ecosystem, with an impact on democracy in the broader sense. But, for example, only a handful of recommendations address the situation of civil society organisations.

To date, the report does not deal in a substantive way with the gaps between the “Europeans’ aspirations” and rule of law shortcomings and breaches. To do so, the European Commission would need to be more coherent in its role as guardian of the Treaties and take the necessary actions to protect and reinforce our democracies as much as the internal market rules.

Beyond the limitation in its scope, the success of the rule of law exercise also lies in the commitment to turn the findings into prompt and effective actions, as required by the diversity and the gravity of the challenges affecting the rule of law and democracy in Europe today, some of which are depicted by the European Commission. Without meaningful follow-up, the exercise is void and irrelevant. In this context, we welcome the European Commission’s referral of Hungary to the European Court of Justice over the actions violating LGBTI+ rights and media freedom, a good example of what we expect.

For the first time, the rule of law review includes country-specific recommendations. This is a welcome step forward. However, the recommendations are more often than not expressed in vague terms, without clear benchmarks for success, and not connected with enforcement mechanisms. This risks impairing the ability to monitor their implementation. Emblematic examples are the recommendations regarding civil society organisations in Hungary and Poland. While the country reports depict a gloomy picture for civil society, the recommendations call on the Governments to “remove obstacles” and “improve the framework”, without indicating any specific measure that national authorities should take to redress the situation. The approach of the European Commission to focus on praising processes of reform also risks being counterproductive if these reforms are only cosmetic and poorly implemented. Arguably, reform processes are opportunities in which punctual recommendations could provide meaningful support.

The common recommendations by European civil society on more explicitly linking the annual reporting to the toolbox on the rule of law remain valid. It is crucial that decisions on the funding conditionality are based on the findings of the country reports and any decision to disburse European funds to Hungary and Poland are conditional to the implementation of policies that address all the concerns raised in the report. Moreover, the European Commission needs to identify and implement with no delay mechanisms to divert the funding directly to civil society and journalists that have been affected by the rule of law deterioration due to the politicisation of funding distribution, as corroborated by the European Commission report.

Empower and protect civil society through a comprehensive strategy

In the European Union communication, as well as during the press conference, Vice President of the European Commission Věra Jourová and Commissioner for Justice Didier Reynders stressed the fundamental contribution that civil society plays in the functioning of the rule of law at national and European level. We welcome that the report highlights the importance of the mobilisation of civil society in the context of the humanitarian crisis following the Russian invasion of Ukraine.

The report recognises that in some member states civic actors are “facing serious challenges” such as restrictions to access to funding and physical and verbal threats, confirming some of the trends highlighted by the submission to the consultation by the European Civic Forum and its members and partners. It is therefore crucial that the European Commission responds to these findings with comprehensive measures. To date, while the European Union has started several promising initiatives, which are mentioned in the report, they address in a piecemeal manner, often with important flaws impairing their effectiveness, some of the most urgent problems with which CSOs are being confronted.

For example, the rule of law report mentions the Citizens, Equality, Rights and Values (CERV) programme but the heavy administrative and reporting burden, combined with the high co-funding condition and unrealistic unit cost requirements act as a barrier to the achievement of the objectives of the fund, as many organisations are discouraged to apply or struggle to meet the needed co-financing amount.

We welcome that the report mentions the European Commission’s commitment to increase civil society involvement at the European level, including on its work on rule of law, and we hope this will take place through a formalised policy framework setting relevant standards, mainstreaming best practices across the EU institutions, and putting in place an interinstitutional agreement to establish a participatory status for civil society on horizontal and programming issues. We remain at disposal to discuss how this could take place.

This should be part of an overarching solution empowering and protecting civil society going beyond ad hoc actions. For this reason, we continue to urge the European Commission to take steps towards a comprehensive European Civil Society Strategy to fill existing gaps and inconsistencies of the EU approach to civil society as called for by 300+ CSOs from all across Europe.

We are here to support!

Having all the challenges described above in mind, the European Civic Forum is committed to support the European Commission in order to strengthen the European rule of law mechanism and to ensure its success. We will work with members and partners on the ground to engage in dialogues with national and European authorities on the findings of the report and to monitor the implementation of the recommendations by public authorities. In particular, we will closely contribute to the implementation of the pilot national dialogues organised by the European Commission with the support of the European Union Agency for Fundamental Rights to enhance actual impact.