State of the Union Address: To defend democracy, it must answer people’s needs. Involving CSOs in EU policy making is integral to achieving this. 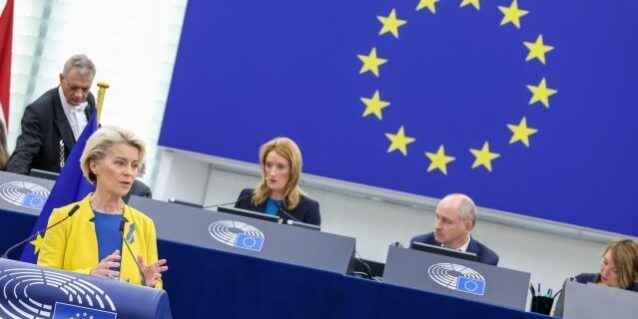 President von der Leyen’s State of the Union address touched upon many issues and broadly formulated proposals, often not sufficiently detailed for immediate in-depth analysis. In this editorial we look at the narrative and the proposals to reinforce European democracy.

We agree with President von der Leyen that “Today we all see that we must fight for our democracies. Every single day.” Putting the “defence of democracy” centre-stage is crucial and more than welcome. In the EU, even mature democracies see the far-right’s electoral progress, and their narratives contaminating mainstream parties’ programmes. The success of the far-right in Sweden and Italy are the most recent examples, with Italy heading towards its first post-war government led by a prime minister from a post-fascist party.

Why do we repeatedly say that the far-right is a danger for democracy? Because at the centre of their programme lies the exclusionary approach that “rights are not for all”, that some are more entitled than others to social and economic rights in particular. Such programmes, if implemented, would bring Europe back to the 1930s. It would represent a total breach of the spirit and the letter of the UN Universal Declaration of Human Rights and of the EU’s own Charter of Fundamental Rights.

Does President von der Leyen provide a proper answer to the challenges facing democracy in the EU? We heard that “foreign entities are funding institutes that undermine our values”, but also that we must “not allow any autocracy’s Trojan horses to attack our democracies from within”. Democracy is seen to be primarily at risk because of foreign attacks. Then comes the need for “judicial independence”, “the protection of the budget through the conditionality mechanism”, and “the updating of the legislative framework for fighting corruption”, elements that are narrowly connected to the EU institutional responsibilities. Finally, she quoted David Sassoli’s line that “Democracy has not gone out of fashion, but it must update itself in order to keep improving people’s lives.” With this quote, President von der Leyen clearly implied that the quality of democracy is to be assessed according to its capacity to deliver public policies that answer people’s needs.

This is a welcome acknowledgement after several crises in EU countries with painful human, social and democratic consequences, but the wording “democracy must update itself” is somewhat odd. It is policy making that needs updating in order to improve people’s life. And those responsible for policy making are policy makers! It is because proper policies have not been pursued that a significant part of the population in Europe demonstrates disaffection with democracy by voting for the far-right, or not at all. Policy makers cannot simply say to these people that democracy is at risk because of external factors; that democracy is better than autocracy. They have to demonstrate that democracy works for answering people’s economic and social needs.

Without elaborating on what policies are needed to “gain and regain the citizens’ trust”, President von der Leyen turned to proposals aimed at introducing elements of participative democracy. Referring to the Citizens’ Panels that were convened in the frame of the Conference on the Future of Europe, she proposed they become “a regular feature of our democratic life.” Injecting new forms of deliberative democracy into EU policy making is more than welcome. But this cannot be a substitute for civil and social dialogue with organisations that unite millions of citizens and workers and articulate in permanent and transnational structures their views and demands to defend fundamental rights and the common good. It is vital that all forms of participative democracy contribute to policy making and that policy making aims at achieving the values and objectives set by the articles 2 and 3 of the European treaty.

The Civil Society Convention as well as the European Confederation of Trade Unions, which participated in the Conference on the Future of Europe, called the national and European institutions to improve both the functioning of democracy and its result in terms of policies for the common good. We look forward to unpacking the “Defence of Democracy Package” and hope that what civil society has brought forward in the framework of the Convention for the Future of Europe will be reflected in upcoming crucial policies and political priorities to be decided.