The European Citizenship Awards 2018 is a joint initiative between the European Civic Forum and Volonteurope, two European networks which promote active citizenship and recognition of the importance of social justice to the cohesion of communities across Europe. 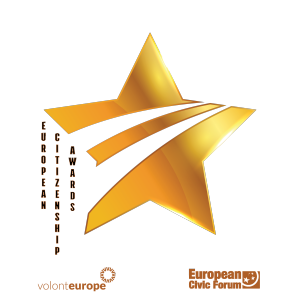 The Awards celebrate the democratic and civic engagement of individuals, organisations, citizens’ groups and social enterprises.  They recognise innovative initiatives and contributions which give real substance to European values, create ownership of public space and improve the lives of their communities in terms of democracy, social justice and universal access to rights.
The European Citizenship Awards 2018 seek to reward initiatives which promote solidarity and contribute to the creation of community cohesion, inclusion and social justice.” Eligible nominations are sought from all current Member States of the Council of Europe in the following categories:

If you wish to make a nomination under one of the above categories, please complete the form below no later than by 9 October 2018. An international judging panel will make a shortlist selection of nominees in each of the four categories, which will then be submitted to an online vote between 11 October and 25 October. The online vote will represent 50% of the overall final score, while the remaining 50% will be given by the judging panel.

The winners will be contacted shortly after the final meeting of the judging panel and the press announcement will be released on 10 November 2018. The Awards Ceremony will take place on 2 December 2018, in the Palace of Culture of Gdansk (Poland).

If you or your acquaintances know about any individual, initiative or social enterprise that deserves better visibility and genuinely acts for European values, it is your chance to make them widely known!