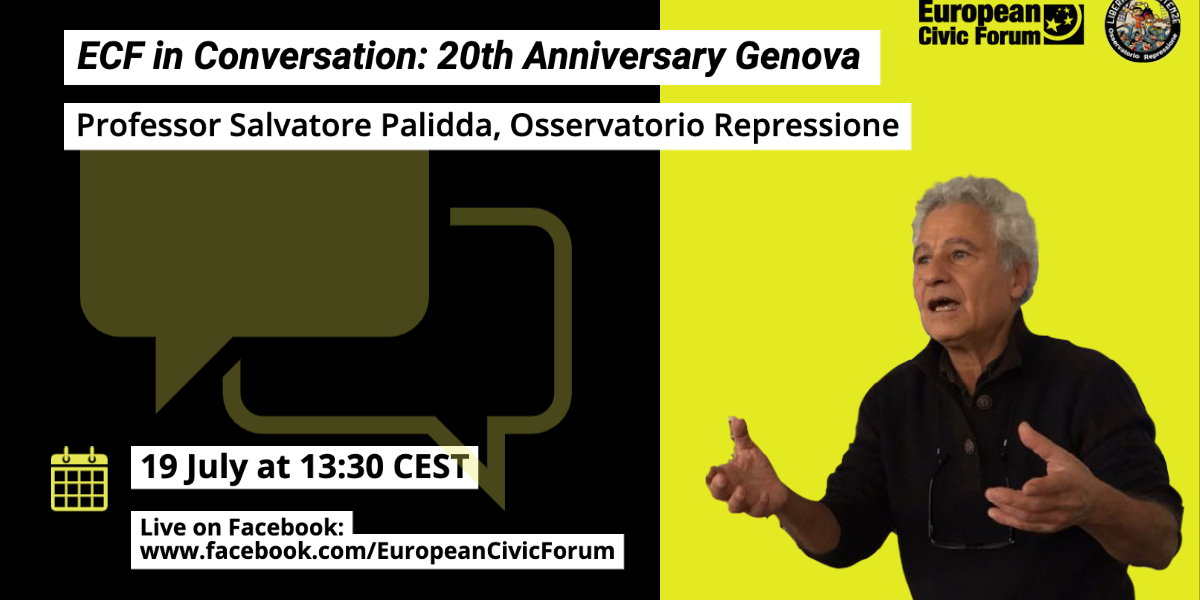 20 years ago, a movement of protest and proposal, organized on a global scale, took to the streets of Genova alongside the G8. It was the continuation of the reflections started in Seattle in 1999. It was the birth of a so-called movement of movements – a social movement converging many mobilisations and demands around the criticism of neoliberal globalization and the proposal of an alternative political proposal to the « Washington consensus ». Genoa was one of the important steps in the construction of the altermondialist movement.

There was a lot of hope in the streets of Genova. Sadly, today we remember those days for the totally unjustifiable violence perpetrated by the police forces in 2001 against peaceful protesters, the killing of Carlo Giuliani and the brutal torture in the school Diaz and the police station of Bolzanetto. As Amnesty International commented at the time, this was « a violation of human rights on a scale never seen in recent European history ». 20 years later, the G8 in Genoa remains an open wound.

But the demands and proposals emerged 20 years ago remain and are becoming more and more urgent in the context of the COVID-19 pandemic that has exposed the vulnerability of the system that thos in Genova were protesting 20 years ago.

For this reason, today, 20 years later, social movements and civic organisations from Italy and across the world are meeting in Genova to remember what happened 20 years ago but also to reflect on the present and look forward to a different future.

Who was in the squares of Genova 20 years ago?

The people of the protest against the G8 in Genoa of 2001 was very composite: it included young and old, people that participated in a protest for the first time, Catholic nuns, priests and monks, sympathizers and adherents to all sorts of environmentalist associations, pacifists and all kinds of left-wing trade union organizations. Of the three hundred thousand who demonstrated in Genoa, the militants who usually participate in protests were a minority.

What was their hope for this moment?

Their hope was to stop the wicked choices of neo-liberal domination: the exasperated increase in the wealth of a few and the continuous increase in the poverty of a large part of the world’s population, the instability, insecurity and precariousness caused by liberal development, permanent wars and the war on migration, the continuous destruction of the ecosystem; in short, the hope for a fairer world.

In reality, for at least 6 months it was understood that all the dominant powers had decided to crush the escalation of the world protest against their choices, at any cost. The prologue to the brutality and torture in Genoa had already begun in Naples in March. Secret services and police forces had prepared a repressive plan to crush the protest at any cost. The media had fuelled a climate of terror. The city was militarized and its inhabitants urged to abandon it. The suspension of the democratic rule of law was first decreed by the centre-left government and then by the Berlusconi government. The brutal attack on the authorized demonstration of the “white overalls” was the beginning of the slaughter. The assassination of Carlo Giuliani was the predictable epilogue of the day of the 20th of July. The massacre and torture in the Bolzaneto police barracks and then in the Diaz school after the widespread violence during the day of the twenty-first of July were a deliberate choice to show all the demonstrators that one should not dare to protest against the rulers. Most of the police officers had been selected among fascists who were incited to savagely beat all sorts of demonstrators. Such furious brutality and torture had never been seen even during the worst years of police repression after the sixties. Since the brutalities and tortures in Genoa, in Italy there have been a number of deaths at the hands of the police or in prisons that had certainly not occurred in the previous twenty years. The brutal practices of the police have also became common in other countries like the United States and France, in particular.

How did these events change the landscape of social movements in Italy and Europe?

The so-called movement of movements originated in Seattle. In Genoa it reached its maximum development. But after that it continued in Nice, Hamburg and on other occasions even if it was in decline. Finally, it can be said that “Occupy” and the “indignados” in Spain, but also many other movements, albeit local, against the great construction and infrastructural works, have been a continuation of the protest against the choices of neo-liberal domination. In Italy, a year after the G8, there was also a demonstration of three million people in Rome against the war. However, since then there has been a continuous fragmentation of the protests and an evident difficulty of convergence for major events such as the one in Genoa. This is also the result of a repressive action that has since sought to erode public action. The military-police management of the pandemic has heightend this erosion. As Antonio Mazzeo shows in one of his essays, there has been an impressive militarization and police governance, even of the health emergency. Yet, these struggles are not obliterated because neo-liberalism increasingly imposes over-exploitation and even neo-slavery. These struggles are, above all, necessities of survival.

The main questions that arise today concern the difficulties of convergence of the struggles, of the various local or sectoral movements. The erosion of public action, the gigantic expansion of postmodern controls, the manipulation of social media: all of this increases the difficulties of convergence between struggles that are increasingly repressed. The events in Genoa were the beginning of the new repressive course that wants to put an end to the protests and this is repeated against every struggle. Nonetheless, resistance to neo-liberal domination is renewed in all fields, but the path towards convergence between the struggles will be long.

How has the COVID-19 pandemic impacted police practices in Italy?

We have already answered this question. The management of the pandemic has been conferd on the military and police with the clear aim of eroding the possibilities for public action, for collective action. However, this action is an unavoidable necessity for survival, and therefore it does not disappear. Unfortunately, most of the associations have become very fearful and they are partly ensnard in the discourse on « cure ». The watchword of the movement called « The society of care » in Italy, which brings together about a hundred associations that were part of the Genoa Social Forum in two thousand one, is « you are the disease, we are the cure », a discourse that amounts to an understatement. This stance has led to refraining from organizing a large demonstration in Genoa for the 20th anniversary of the events of 2001. However, a reflection is maturing in many local settings that provides new impetus to the search for convergence.

How do you see the role of the European Union in improving the democratic control and accountability of the police in Italy and in Europe?

We think that we must not have many illusions about the role of « democratization » of the European Union which, in its words, appears to want this whereas, in fact, it has launched measures imposing ever-growing controls with new technologies, letting migrants die (involving the criminal work of Frontex) and in support of military and police choices. Unfortunately, there will always be coexistence between a violent and brutal management of so-called public order, alongside a pseudo-peaceful management. This is a demonstration that democracy is a simulacrum. The possible democratization of the police seems less likely today, because they have been given more powers, more autonomy, more political weight, more impunity, and this has strengthened their reactionary corporatism. Unfortunately, in Europe the struggles have not yet become aware of the need to adopt what Black Live Matter suggests, that is, the need to fight for the defunding of police forces, to increase the resources available for social and socio-health services, for prevention agencies and control (labour inspectorates of health etc.). The crucial issue is that, today, the police only guarantee the safety of neo-liberal domination and deny protection to the victims of ignored insecurities which are risks of a health-environmental and economic type (precariousness, illegal work and neo-slavery). The majority of mortality worldwide and in every country is caused by toxic contamination of the air, water, food, tissues and every environment, and to living conditions unfit for human life. The police do not protect the lives of their countries’ inhabitants. We need a true awareness of this reality of ignored insecurities and, therefore, a struggle to reduce the resources of the police and to increase those for social policies.