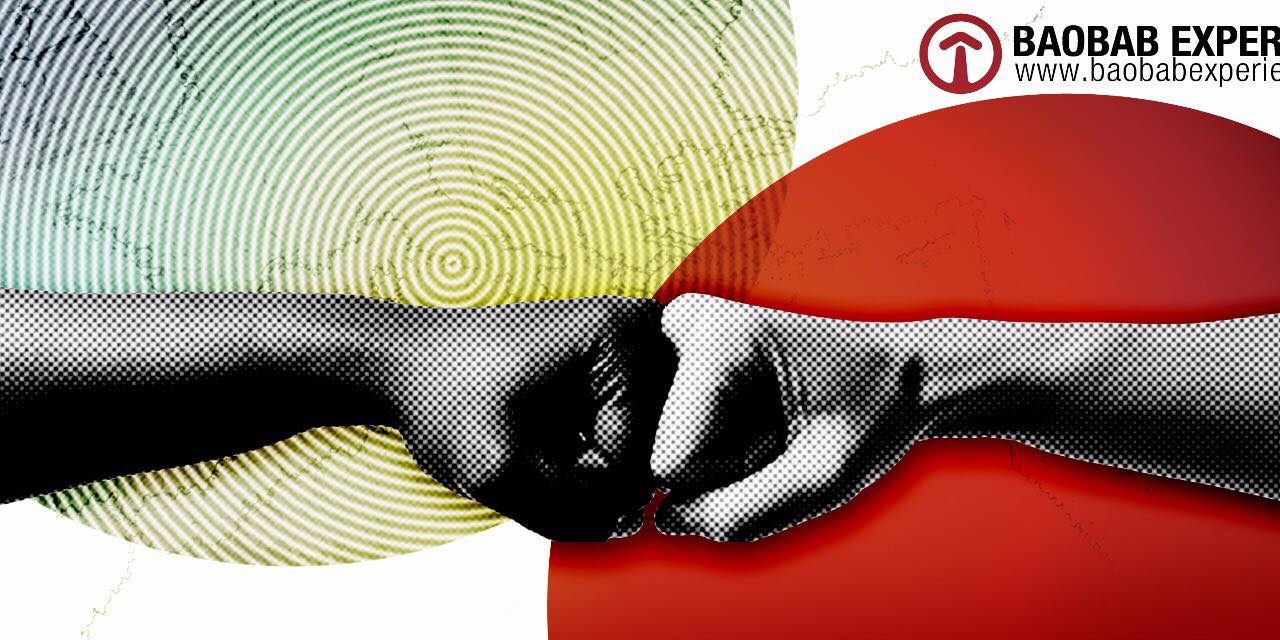 We interviewed Valerio Bevacqua for the group of volunteers Baobab Experience in Rome. Rome is the only European capital without a hub for migrants, and the actions of these citizens have prevented more than 60.000 migrants in three years to be left alone on the street. Nevertheless, the administration in Rome still does not recognise them as a partner to cooperate with. 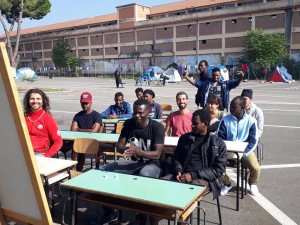 Tell us something about your organisation. For example, what kind of services does it provide to migrants and why are they important?

Baobab, as a group of volunteers, was born in Spring 2015 in via Cupa, Rome. The idea was to offer first aid to “transit-migrants”, who would stop in Rome only for a few days and then keep their journey to Northern Europe. However, we had to move from via Cupa due to an evacuation of the police. Since then, there were more than 20 evacuations. We now operate behind the Tiburtina station.

More than 60’000 migrants came to Baobab, but after three years the situation is much different. Now crossing borders is more difficult and dangerous, and, even when they are able to reach their destination in another European country, the local authorities can send them back to Italy. This is the case of the so-called “Dubliners”, migrants that had their fingerprints taken at their arrival in Sicily who do not have the right to ask for asylum elsewhere in Europe.

Until September 2017, the European Union had established a Relocation Scheme, an ad-hoc initiative to release the pressure from countries of the first arrival and ensure migrants from Syria, Iraq, and Eritrea with the right of applying for international protection in other European countries. This was an exception to the Dublin regulation, and the plan foresaw that 160.000 people would have been relocated across the EU Member States in two years time. In reality, only about 30’000 people were transferred to other EU countries, about 10.000 from Italy. We are still waiting for an extension of this regime. In the meanwhile, Syrians, Iraqis, and Eritreans are stuck here with migrants of other nationalities.

As the political environment has changed, also Baobab services did. At the beginning, we were offering first aid support, an arrival kit, some clean clothes and a map of Europe to keep on their journey. Now we have to provide a more structural help as it is harder for them to leave Italy and some are asking for international protection here. Our action really substitutes that of local authorities: we still cover for material needs like a warm meal three times a day and clean clothes once per week. Now we also coordinate with other local NGOs such as A Buon Diritto, the Italian Refugee Council, Doctors for Human Rights (MEDU), Doctors without Borders, the Italian Radicals, Right(s) to the Heart among others to offer legal help, medical and psychological support.

We go with them to the local authorities because legal proceedings are carried out in Italian, and it is easy to misunderstand each other. Imagine, the questura of Rome only accepts twenty people per day. This means that people to register with the local authorities have to start lining up at night. When the office opens, they are tired after a long wait, nervous and do not understand the language authorities speak in because there are no cultural mediators. The situation is really out of hands, a real torture for those waiting to file their asylum applications. This legal support is really essential to fill the void left by the authorities.

Complementary to this, we organise other kinds of activities: cultural, sports, and artistic. For example, football games once a week, run, we will take part in the marathon in Rome. These activities are so important for people who experienced trauma. Also, sport and art are two channels of integration in society. These activities also include tours in the city, to museums, monuments, and exhibitions. They live in the street, and the only part of Rome they see is a parking lot. We want them to see the beauty of Rome and culturally connect with the city. We want to show a different side of the Italian culture and society.

Despite all these activities, we still are just a group of volunteers. We do not receive public funds, only donations from private citizens or non-governmental institutions. We are not paid for our work, so we do this in our free time after working or studying. We still do not have a kitchen, or bathrooms, or even access to water, nor electricity. We prepare meals at home, and we carry them here. For the water, we go to the train station. 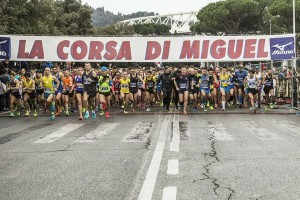 BAOBAB Experience is probably is an emblematic case of criminalisation of solidarity as, from what I understand, it all began with the first evacuation of migrants and volunteers in Ponte Mammolo in June 2015. How is your relationship with the local administration and the police since then?

The relationship is fundamentally unidirectional. We went through three different local administrations with Ignazio Marino, the technical commission of Francesco Tronca, and now with Virginia Raggi. Nevertheless, we experience no change in their attitude to our work.

We ask their three councillors for social policies to establish a hub for migrants in transit. Rome is the only capital in Europe not to have one. They did promise us to build it, but still, there is no new development. If Baobab did not exist, they would out on the street. Marino said that he would renew the Ferrhotel next to Tiburtina station back in June 2015 and open it to the migrants. The structure was supposed to be able to welcome 80 people. This never happened but, even in the best case scenario, it would not be enough. Now that is winter, and the number of arrivals from the Mediterranean is decreased we host about 100 people. In the summer, we can reach 500-600. This is insufficient. This can only be a short-term solution, not a long-term one. There are many empty buildings in Rome, in the city centre too. Ideally, a hub should be established in Termini station, when the migrants reach Rome. But the local authorities have no interests in bringing the migrants in the heart of the city: “lontano dagli occhi, lontano dal cuore” (Translation: what you can’t see, can’t hurt). It is a way for the state not to see the problem, but for the migrants, this is like a punishment.

Occasionally, they tell us that a hub cannot be built because it would encourage more people to come to Italy. They even said to us that we, the volunteers from Baobab, are a ‘pull factor’ for migrants coming from Africa. I can only laugh at such a ridiculous statement. Really, it is ridiculous to think that people would leave their country and experience such a dangerous and difficult journey just because a small group of volunteers in Rome will welcome them in a parking lot, offering few tend to live in. The administration treats us as we were a luna park for migrants to have fun. It is so far away from the reality I hear in the stories of these people. They are so tragic.

An important initiative is the visit of schools, mostly high schools. We started by chance. You know some professors or some students… But then the word started spreading, and more and more schools began inviting us to share our experience with Baobab. We try to bring with us also migrants when they feel conformable. We let them free to talk about what they prefer: why they left, the journey to get to Europe, their staying in Italy. It is such a powerful experience for students. Most of them have never seen a migrant, only on the TV. Let alone talk to them. It is moving for everyone, students, volunteers, and migrants. Some student comes to us afterwards to ask how they can help.

Also, libraries in Rome recognised our role in managing the situation with migrants and last year they organised several conferences and meetings to share our experience. There were also filmmakers and high-level journalists, but we were always invited among the main speakers. It is funny, the local administration fails to recognise us as an essential partner to cooperate with, but other institutions consider our experience crucial to understand and handling migration in Rome. 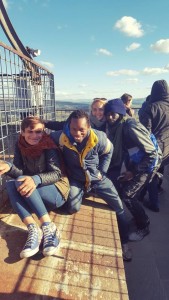 How did the public administration justify these evacuations?

Well, the decisions were made by the local police, state officers, and local institutions. The reason was either public decency or even public security. Often these evacuations happened after terror attacks in other European cities. Baobab was treated as a group of terrorists.

When citizens were profoundly worried about their security, as a measure to release tensions, they would come, force the migrants on a bus, and then throw everything away. They throw everything they find, including documents and personal belongs. This is everything a migrant holds on to; this is such a psychological violence. But it is also a waste of public money and time, because when they bring the migrants to the questurea to have their fingerprints taken but their fingerprints are already in the system form their arrival in Italy. For these reasons we filed a legal complaint, but it will take time to give results.

I think it is such nonsense to treat these measure as functional to security. Quite the opposite. Investing in protection for migrants is an investment in security because you prevent people with multiple psychological traumas from living in the street. Without Baobab these people would still be in Rome, just they would be alone in the street, easy prey for micro criminality and organised crime. Otherwise, how would they survive? 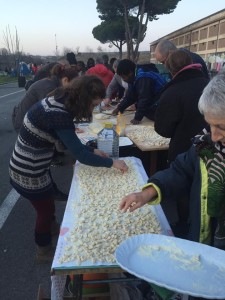 How can the European institution improve EU migration policies to encourage cooperation between civil society and public administration?

I think that a discussion to change the Dublin regulation is already a positive step. The EU must encourage solidarity among member states and moderate the tones of the conversation: talking about an invasion is misleading, there are not the numbers for this. Especially in comparison with other realities across the world. ⅓ of Lebanon population is migrants. Also, the EU should think migration policies more comprehensively, including integration in the work market.