European Movement Italy: Let us give a democratic dimension to the European Political Community 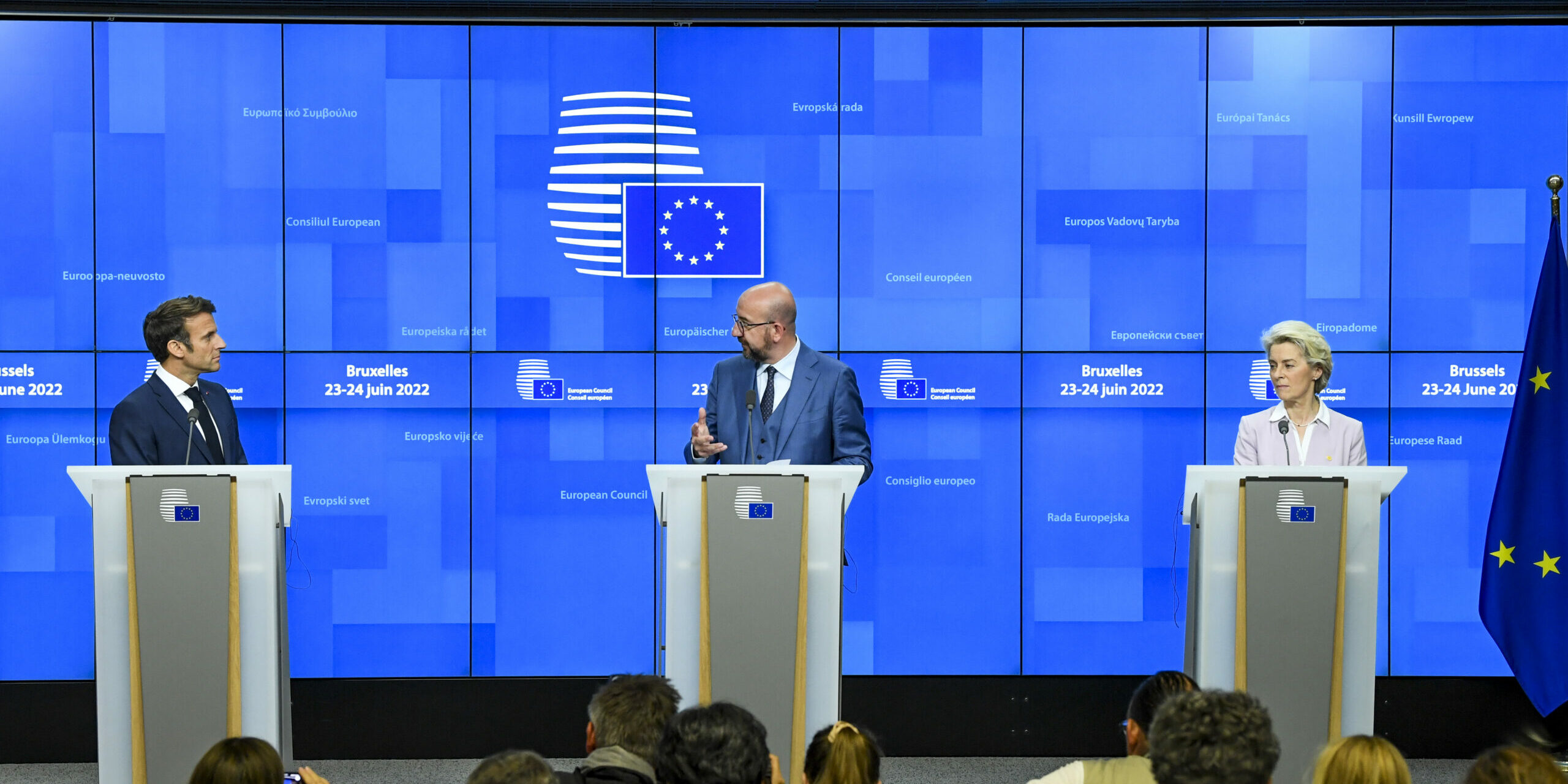 Earlier this year, French President Emmanuel Macron proposed the creation of a European Political Community, a body to bring together the EU27, EU candidate countries, EFTA countries, the UK and potentially others. Ahead of the first EPC summit on October 6-7, European Movement Italy President Pier Virgilio Dastoli argues that the EPC must not just be an intergovernmental forum. Rather, it should take up the recommendations from the Conference on the Future of Europe and become ‘a permanent laboratory for dialogue between representative, participatory and proximity democracy.’

The European Council of June 22-23 had been asked to respond to Ukraine’s insistent request to obtain the political status of « candidate country for accession« .

In the meantime, French President Emmanuel Macron launched the idea of a « European political community » (EPC) with the aim of associating to the 27 countries of the EU with  the other countries on the European continent and mainly the candidate countries.

No progress has been made on the content of such project nor on the method at the June European Council, which merely took note of the idea.

At the same time, it accepted the request of Ukraine (and Moldova) for recognition of candidate status – which is not provided for in the Treaty of Lisbon (Article 49 TEU) – and the Czech Presidency announced that it would promote a first EPC summit on 6 and 7 October in Prague.

Emmanuel Macron recalled his idea in front of his country’s ambassadors in a broad but not very concrete speech and Chancellor Olaf Scholz made the beau geste to support the French idea in his speech in Prague but neither one provided further details.

The idea has provoked cautious reactions (if not hostilities) in the Western Balkans, which have been knocking for years on the doorstep of the EU and which fear the trap of a vague intergovernmental organisation (the « confederation » of François Mitterrand of 1989) as a substitute for genuine accession.

This comes at a time when access to the EU seems further and further away for the countries with which negotiations have already begun, as well as for those whose negotiations are frozen, and for those on which the formal favorable opinion of the European Commission is still pending.

The composition of the EPC is still indeterminate: some consider it a space for dialogue with candidate or eligible countries to the accession – with a great question mark on Turkey, still formally a candidate.

Some would like to include « associated » countries but not candidate countries or countries such as the United Kingdom (which reacted with great coldness), Norway and Switzerland, bringing its composition closer to that of the Council of Europe.

Finally, some consider at least premature the enlargement of the EU if it is not preceded by a political deepening of the current EU or less then 27 members or the eurozone as the optimal political dimension for the transition from the current confederation as a main element of the EU for a federal model.

The first informal EPC meeting should, however, take place in Prague on the sidelines of the informal meeting of the Heads of State or Government of the 27.

The invitation to participate could be addressed by the President of the European Council Charles Michel and the Prime Minister of the Czech Republic Petr Fiala together with the French President Emmanuel Macron to 44 Heads of State and Government, namely the 27 and then Iceland, Liechtenstein, Norway, Switzerland (EFTA members); Albania, North Macedonia, Moldova, Montenegro, Serbia, Turkey, Ukraine (candidate countries) but also Armenia, Azerbaijan, Bosnia and Herzegovina, Georgia, Kosovo and the United Kingdom.

The composition is still uncertain due to the reluctance of some possible guests or members of the EU.

The position of the United States towards this hypothetical alliance of « European democracies » (with which Turkey would also be associated) is also uncertain.

What is certain is that the EPC will not be formally created at the Prague meeting because nothing has been clarified between the 27 and the candidate countries on the competences of the EPC, its working methods, the institutional framework to be adopted and last but not least on the relations with the enlargement of the EU.

The last point is of particular importance given the aggression of Russia against Ukraine, the uncertain outcome of the war and European differences in relations with the Kremlin.

The objective or hypothesis of the « concentric circles » on which the member countries have been divided since the sixties with the proposal of Europe à la carte, reiterated in the nineties with the Kern Europe project or the German magnet launched by Schaueble and Lamers (who recently disappeared after a long political career in the ranks of the CDU) seems to have been temporarily buried by Olaf Scholz with his speech in Prague.

Olaf Scholz reiterated Germany’s support towards an Eastern enlargement and underlined that the geopolitical upheaval caused by the aggression of Russia against Ukraine makes urgent and necessary the cohesion of the entire European anti-Putin coalition in an enlarged and strategically placed EU within the framework of NATO.

It is clear that the issue of enlargement of the EU to the Western Balkans on the one hand and to Eastern Europe on the other can no longer be addressed and resolved with the method used since 1972 in the subsequent seven accession procedures from the small Europe of the Six to the large EU of 27 (with negotiations against Brexit).

Each time, the dialogue was limited to individual candidate country, with the European Commission under the intergovernmental control of the Council, the European Parliament being involved only upstream (or downstream from Maastricht onwards), and national parliaments called only to ratify the accession treaties – often accompanied by confirmatory referendums.

After (or rather: with the ongoing) Russia’s aggression against Ukraine and in the face of the challenges of the 21st century and the prospects of an enlargement of the EU to almost forty members with a project of unification involving almost the entire European continent, the issue of enlargement will become central to the future of Europe, of all the parliaments and its peoples that cannot be excluded from this debate.

For this reason, the EPC project envisioned by Emmanuel Macron cannot be enclosed within the intergovernmental limits of periodic summits between Heads of State and Government, but should rather become a permanent laboratory for dialogue between representative, participatory and proximity democracy by extending and strengthening the innovative method adopted at the Conference on the Future of Europe with the tools of the digital platform, transnational and national panels, the deliberative conventions of citizens, and the mobilization of « ambassadors » from civil society.

The start of a wide-ranging EPC would coincide with the preparation of the European elections in May 2024 and with the congresses of European parties that will have to adopt the program and priorities for the 2024-2029 legislature.

The EPC’s work could be inspired by an interparliamentary Conference, modeled on the 1990 Rome « assises » that took place on the eve of the Maastricht Treaty.

Said Conference could be organized in the autumn of 2023 during the Spanish Presidency of the EU Council, inviting delegates from candidate or eligible countries to stand for election.

The necessary reform of the EU, to go beyond a treaty signed fifteen years ago in an international and European situation radically different from the current one, will have to take into account not only the recommendations of the Conference on the future of Europe which was too hastily closed on 9 May 2022, but also the ideas that will emerge in the EPC and which will have to clarify the principles and values of a community of destiny.

The decision to participate or not in such shared destiny will be irreversible.

In order for this process to be democratic and conscious, the way forward is not a modest and limited revision of the Lisbon Treaty but an ambitious constituent role of the European Parliament that will be elected in May 2024, whose action will be parallel to that of the EPC.

It would be up to the European Parliament still in office to give an updated political content to the state of the EU.

The European Parliament should also draft a preliminary agreement on an enlarged community of destiny to be submitted for ratification by the national parliaments « in order to ensure that enlargement and reform of the EU are the result of an unquestionable democratic consensus« , taking up the idea that had been launched by the member of the Convention on the Constitutional Treaty, Alain Lamassoure.

This agreement could contain a proposal for a method that would give legitimacy and substance to the start of a constituent process and confirm that the community of destiny is founded on respect for the rule of law and fundamental rights, on the primacy of European law in the areas of competence of the EU, on representative and participatory democracy, on the strategic autonomy of the EU as an international actor, on the rejection of war, on European citizenship, on shared prosperity, on solidarity and on loyal cooperation.

In doing so, the issue of EU enlargement to the Western Balkans and Eastern Europe would become a central part of Europe’s future.