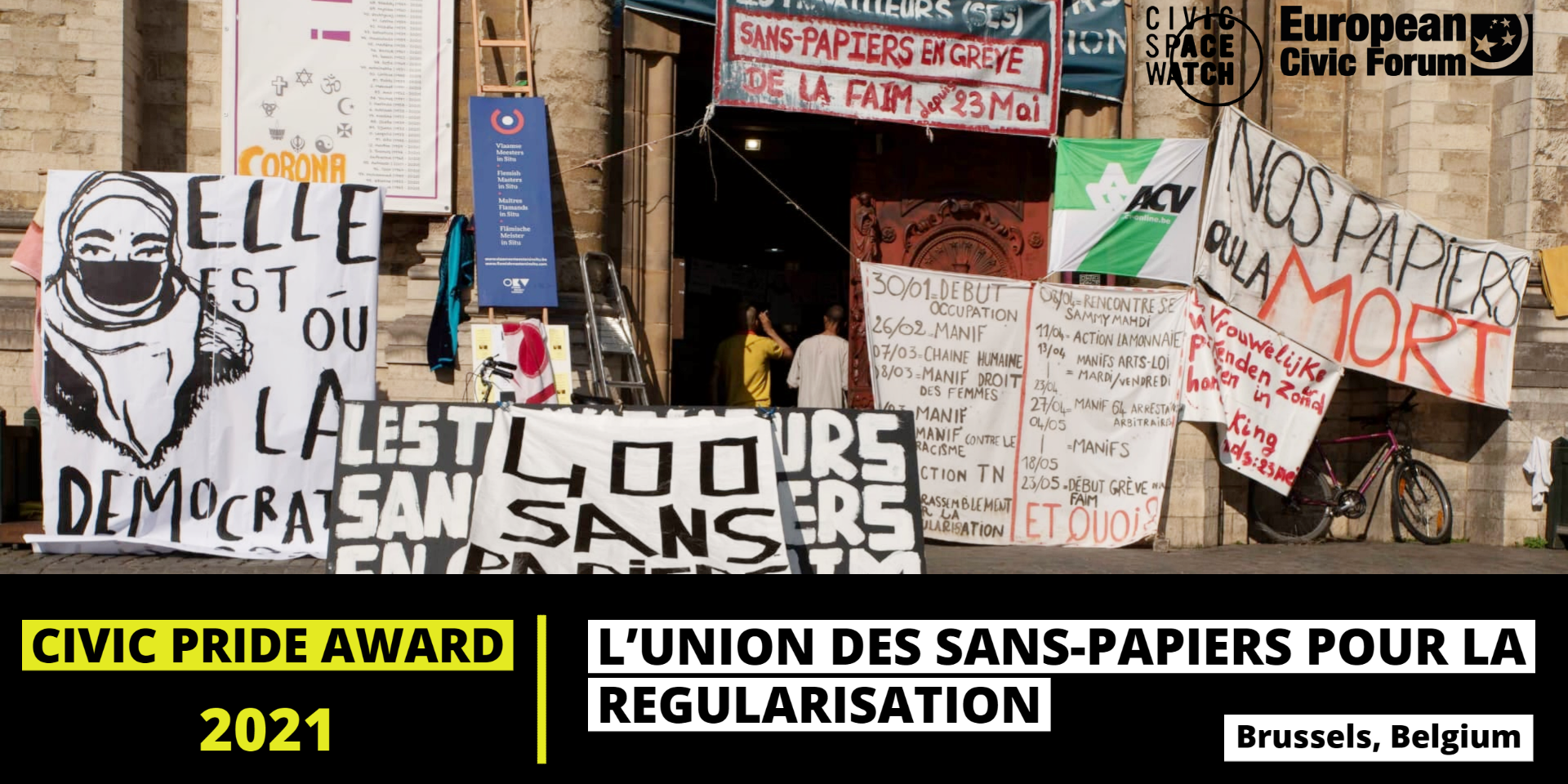 The European Civic Forum (ECF) has announced its decision to present the Union des Sans-Papiers pour la regularisation (L’USPR) with a Civic Pride award. The award considers the urgency of supporting undocumented people in denouncing their deteriorating situation and upholding their rights. An official notification of the award will be delivered in person, together with MEP Pietro Bartolo at 5PM CEST on Tuesday, 13 July 2021, Beguinage Church, Brussels.

The annual ECF Civic Pride award recognises outstanding civic initiatives in Europe, showcasing the actions of civic actors and raising their visibility at the European level. L’USPR is one of 6 awardees* across Europe for 2021.

The ECF supports L’USPR in its fight for clear regularisation criteria, and the establishment of a commission to process regularisation requests, in light of their increasingly precarious situation and vulnerability during the COVID-19 pandemic. The ECF is fearfully witnessing the severe deterioration of the mental and physical health of those on hunger strike, including a number of attempted suicides in the last month. ECF is deeply concerned and urges Belgian authorities to open a dialogue.

« The story of the Sans Papiers in Brussels is a symbol for how underrepresented and marginalised communities do not have access to civic space. We are horrified by the absence of proper answers to the demands put to the Belgian authorities in this desperate situation.”

Everyone should have access to basic rights and dignity, irrespective of their migration status. Authorities have a duty to ensure this and to engage in dialogue with those that are affected by their decisions, including with the associations that represent their interests.

“The ‘discarded’ of the world as defined by Pope Francis. Without identity and without land. How easy it is to leave those who have no defence in a corner. If politics does not act, it will have to bear this heavy burden. We are all part of the San-Papiers protest. Whoever has the power to do so, must put an end to this injustice.”

The case of the Sans-Papiers in Belgium is not unique; the lives and livelihoods of undocumented people in many situations across Europe are at stake. It is essential that struggles like that of the L’USPR are not only platformed, but also made audible to European decision makers. The ECF Civic Pride award is part of the continued support to all those fighting for civic space and fundamental rights deserved by all.

*Other recipients of the Civic Pride award include the Civilisation Coalition in Hungary, for their work against the 2017 Lex NGO on foreign funding, and the Observatorie of Police Practices in France for their actions including a victory against police rulebook provisions supporting violent practices in the context of protests. The activists will be invited to share their story and receive their awards in a ceremony organised with the support of MEP Pietro Bartolo in the European Parliament in January 2022. Press and NGOs are invited to join the European Civic Forum and MEP Pietro Bartolo for a press conference at Beguinage Church, Brussels at 5PM CEST on Tuesday, 13 July 2021.

The European Civic Forum brings together over 100 associations and NGOs across 27 countries in Europe, standing up for democracy, solidarity, and equality.

MEP and gynaecologist Pietro Bartolo, is known as the “doctor of migrants”, having treated over 300,000 migrants and refugees on the island of Lampedusa. In May 2019, Bartolo was elected as a Member of the European Parliament. He sits in the S&D group and is Vice Chair of the Committee on Civil Liberties, Justice and Home Affairs. This is Bartolo’s third year supporting the European Civic Forum Civic Pride awards.

For more information or to arrange an interview, please contact Alice Hubbard via email ahubbard@civic-forum.eu.

For civil society organisations across Europe, join us! We are always stronger together.