Will Belgrade be the next participatory city? – Interview with Ne Da(vi)mo Beograd

After four years of local struggles and fights against the massive privatisation of public spaces, the citizens’ initiative Ne Da(vi)mo Beograd (Do not let Belgrade D(r)own) is now running for Belgrade local elections, which will be held on Sunday 4 March 2018. The grassroots’ movement which organised the biggest protests since the fall of Milosevic in 2000, aims at continuing its engagement at the institutional level.

The European Civic Forum met them in their “headquarters” a few days ago and wanted to know more about this movement, which is committed to shift the struggle for common goods from the streets to the City Council! Ljubica Slavkovic, Dobrica Veselinovic and Marko Andjelic answered our questions.

The Initiative Ne Da(vi)mo Beograd – Don’t Let Belgrade D(r)own were created as a group of active citizens, but you are now running for municipal elections. How do you switch from one to another?

Dobrica Veselinovic: Initiative that uses all possible means to fight for a better life for citizens, which includes political involvement, but also protests in the streets, administrative procedure against the institutions/

Ljubica Slavkovic: this is one of our main beliefs, that citizens need to do politics and to get involved in this. In doing so, we are just continuing what we started four years ago. There are no “switches” because we are doing it all the time. 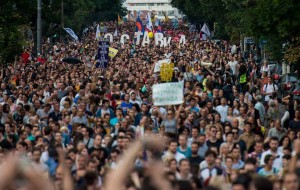 Social issues are not a high priority in the political debate, especially in Serbia. We witness many discussions through a nationalistic approach. How do people react to your discourse when you bring forward social issues, a better environment? Is it a priority to them?

D.V: this nationalistic narrative is an easy tool to blur citizens’ perspectives and prevent them from looking into the real problems they are facing every day. In the media, you always see a scandal, something that diverts people’s attention from their problems.

When we discuss with people on the ground, they do not talk about nationalistic issues, they are facing so many problems in their daily life that talking about social matters is a relief for them. Also, we do it since our creation, while traditional politicians usually take measures just before the elections start.

“These movements gathered together with Ne Da(vi)mo Beograd do not necessarily share a political vision, but they want to improve life in their communities and environments.” – Dobrica Veselinovic

How do you consider active citizenship in Belgrade and Serbia generally?

L.S: It is now related to a very positive feeling. In the beginning, we saw that people were not interested, because they felt helpless in resolving some systemic problems. Our primary goal was to bring them some hope back, that they could really change something in their environment. Four years later, more and more people are active politically; they are committed to bring a change in their communities themselves.

D.V: either we get closer to more themes of citizens’ interest, or there are more themes and struggles currently going on in Belgrade. Sometimes, it is not motivated by a broader vision to fight for a model, but all these movements we are gathering are here because of the need to improve their communities and their surroundings.

Do you feel an improvement in people’s participation, in their support to the Initiative?

L.S: a growing number of citizens are looking for information about us, creating new groups, coming to the protests and actions. Globally, we have much more people following and supporting us than we did at the beginning.

D.V: It started from a dozen of people, then grew in thousands, with some last events ended with more than 20,000 people. Definitely, the core group of people also increased and this shows that we are on the right path.

L.S: this is the result of really working on the issues that citizens face. Thus, we do not consider this as a political campaign, but rather the logical continuation of what we did in the previous years, in the neighbourhoods and on the streets.

“We are totally censored by the media, which operate under the regime’s thumb” – Ljubica Slavkovic

You mentioned the engagement with people and information about the Initiative. How do they know about you? We have heard about the difficult situation of the media landscape* in Serbia…

D.V: not only are the channels of communication under control. All these places where politicians have a public space are also under strict scrutiny by the ruling party.

L.S: not to mention that we are totally censored by the media under the regime’s thumb.

D.V: for example, it is nowhere written on the official City’s website that there will be elections on 4 March. Also, the society is very polarised between pro- and anti-government supporters. It is always about some gossips, which does not enable a real debate to take place. Our biggest problem is that citizens barely know about us through mainstream media, otherwise we would have much more support. It also shows that they are scared of us, because we are pointing out at some real problems, which they try to cover up.

L.S: nevertheless, we have worked a lot on raising awareness among citizens. We have organised debates, conferences, workshops with citizens. We are mostly relying on the word to mouth method. Citizens who know us tell their friends and families and so on and so forth. Our informal network of communication is now well established. 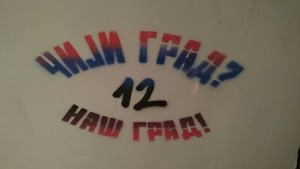 We spoke about the protests you organised, the freedom to associate and the media blackout on neutral information.  How would you consider this civic space in Serbia at the moment?

L.S: I would call it a simulacrum. The Serbian Constitution guarantees all these freedoms, but it is all about pretending to respect them, because the authorities do not respect them at all in practice. All parts of society are under strict watching by the government and the ruling party

D.V: In addition to that, they always put forward the fact that there are numerous candidates and lists – some of them created by the Government to show that they respect plurality– in elections, a growing number of organisations (created by them too). It shows to what extend the Government tries to reflect an image of an open and democratic country, while it is not the case.

One last question: you have now well established links with similar groups of citizens across Europe and beyond. You have the support from abroad. Do you consider it as an advantage or is it too time-consuming?

D.V: when people from here do not often have the possibility to travel, study and learn abroad. You start wondering if your vision is the right one, if you are doing the right thing for your city. Of course, each city and each local struggle is peculiar and you cannot copy/paste successful models.

L.S: it is very important, to maintain these links and see that you are not alone in your fight. We are all calling for the same model. We learn a lot from each other and in this sense, having these transnational networks of citizens’ movements is crucial for the Initiative.

Marko Andjelic: I would also like to add that people from the region that live abroad are a very powerful way of disseminating our activities and work to other audiences, which usually do not hear that much about Serbian activism. 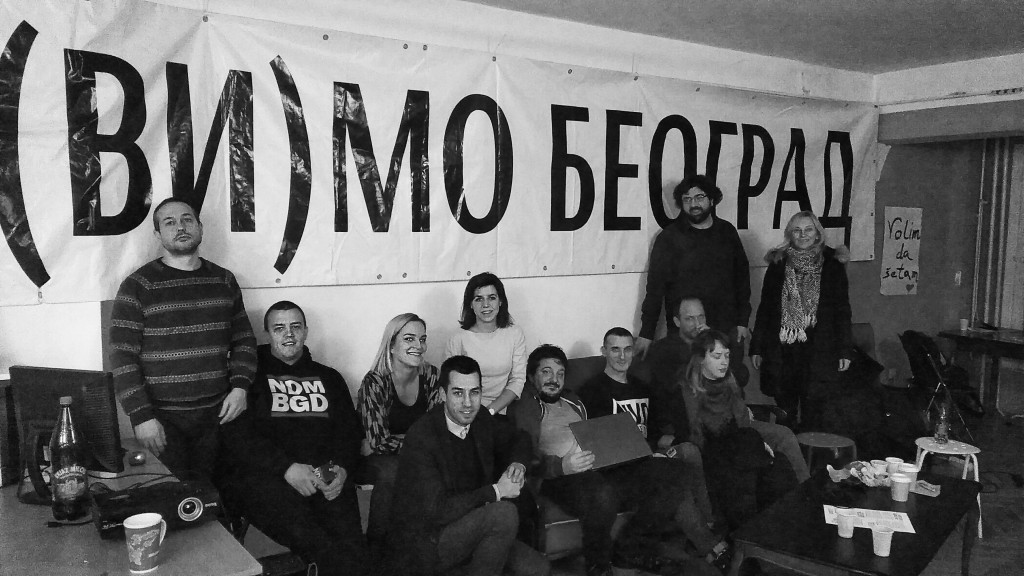 Some of the members in their headquarters – Belgrade, Serbia

* Transparency Serbia’s latest report shows that SNS, the ruling party of president Vucic, is overwhelmingly represented on front covers of the main national newspapers, 70 times more than all the opposition parties put together.