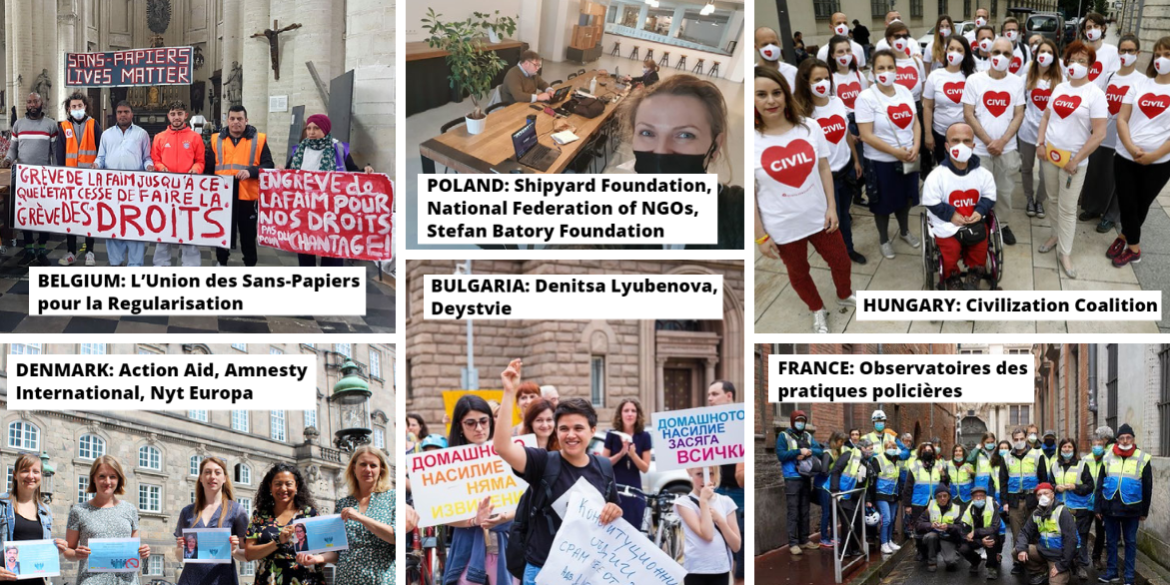 We are delighted to announce the winners of our Civic Pride Awards for 2021!

Our annual Civic Pride award recognises outstanding civic initiatives in Europe, showcasing the actions of civic actors, raising their visibility at the European level, and encouraging convergences between their struggles. To celebrate their inspiring work, we will present the awards in a ceremony at the European Parliament in Brussels in January 2022, coinciding with the publication of their stories in the launch of our annual Activizenship report.

This year, we were overwhelmed with success stories from activists and groups at the forefront of defending and expanding rights for all from across the European continent. The stories spanned successes in areas of freedom of association and peaceful assembly, LGBTI rights, the rights of undocumented people, grassroots community organising and improving access to funding, amongst others.  We were inspired by all of the nominations and would like to thank those that submitted nominations for their extraordinary work in reclaiming civic spaces!

After long debate, the ECF Steering Committee reached a final decision on the 2021 winners. We wish them a huge congratulations for their inspirational stories!

READ ABOUT THE WINNERS BELOW:

The Sans-Papiers of Brussels are hungry for justice

L’USPR represents a movement of undocumented people in Belgium, who started occupying the Beguinage Church and sites at ULB and VUB Brussels universities in January 2021. Since 23 May 2021, over 400 undocumented people have been on hunger strike to demand clear regularisation criteria, and the establishment of a commission to process regularisation requests. Despite large mobilisation around the strike, institutions have failed to start a dialogue. The story of the Sans-Papiers is a symbol for how underrepresented communities do not have access to civic space. The award considers the urgency of supporting undocumented people in denouncing their deteriorating situation and upholding their rights.

In light of the critical situation, official notification of the award will be delivered in person, together with MEP Pietro Bartolo at 5PM CEST on Tuesday, 13 July 2021, Beguinage Church, Brussels and will be livestreamed on the ECF Facebook.

In defence of freedom of association: retraction of the LexNGO law in Hungary

The Civilization coalition was established to enable more civil society organisations to support one another in fighting for a common cause that promotes collective care, protection of disadvantaged people and preservation of nature. The coalition’s work in campaigning against the abusive and stigmatising LexNGO law, which violated fundamental freedoms of association and the protection of personal data, is a historic moment for European civil society. This award celebrates the coalitions’ efforts, which span over 3 years, in fighting the LexNGO, taking the case to the European Court of Justice and ultimately resulting in the repeal of the law. Their work was able to put an end to an unnecessarily damaging and stigmatising civil society law in Hungary, but the fight for civic space in the country is not over!

Observatoires des pratiques policières is a network of local observatories to bear witness to the experience of demonstrators across France.  These observatories play a fundamental role in the defence of freedom of peaceful assembly, documenting and denouncing repressive police practices and policies. The Civic Pride award celebrates their important victory in gaining official recognition of the role that human rights observers play, like journalists, at protests, and the outlawing of heavy-handed police practices in the police rulebook provisions supporting in the context of protests (including ‘kettling’ techniques) via a State Council ruling.

Lawyer and LGBT youth NGO mobilise for baby Sara: 1.5 years old and stateless due to discrimination based on parents’ sexual orientation

Baby Sara is a child born to British and Bulgarian mothers in Spain. Sara’s story brings to light the outstanding work of lawyer Denitsa Lyubenova and NGO Deystvie in their dedication to improving the rights of LGBTI people in Bulgaria. Following refusal of the Bulgarian authorities to recognise baby Sara’s Spanish birth certificate recording both her mothers’ names, Lyubenova has taken her case to the EU Court of Justice. In parallel, NGO Deystvie has set up a legal defence programme providing support to LGBTI couples in Bulgaria. The award recognises the tireless commitment of Lyubenova and Deystvie to LGBTI rights in the context of a complex cross-border family case and a hostile environment for the LGBTI community in Bulgaria.

Shipyard Foundation, National Federation of NGOs (OFOP), with the support of the Stefan Batory Foundation.

In responding to the omission of organised civil society from the preparation and consultation on the National Recovery and Resilience Plan in Poland, an unofficial coalition of NGOs mobilised to initiate their own series of public hearings. Within a few weeks, the coalition organised the largest ever public hearings in Poland, resulting in a series of 11 public hearings over 11 days, bringing together over 460 speakers (from civil society, local government, trade unions, businesses etc.), and watched by over 20,000 people via livestreams. This award celebrates the determination of NGOs in defending civil dialogue, in bringing social partners and local dignitaries on board, and making their voices audible to decision makers, who recognised the value of the hearings by attending and assuming roles as listeners.

In early 2021, the Danish government proposed a draft law to parliament granting police the power to issue a “security-creating assembly ban” if a group of people exhibit “insecurity-inciting behaviour”. In recognising the serious repercussions for freedom of peaceful assembly rights and minority groups, CSOs Amnesty International, Action Aid Denmark and Nyt Europa came together in defence of civic space. The decision to award their initiative celebrates their successful national and international mobilisation against limitations to civic space, which culminated in parliament voting down the « security-creating assembly ban ». At the same time, this story highlights the struggles that are to come in responding to stigmatising and discriminatory policies in place against migrants.

The ECF Steering Committee has decided to award a special commendation to the Belarussian women mobilising for democracy in honour of their fight for dignity and spirit of freedom, which has been met with violent answers from enforcement forces. Independent human rights defenders in the country have reported numerous violations of human rights, including unlawful detention (with many kidnapped from the streets by unmarked forces), intimidation, physical abuse and violence, arbitrary arrest, hundreds of cases of torture and in some cases even death at the hands of the authorities. Nevertheless, they have showcased an incredible resilience and strength.

We stand in solidarity with brave Belarussian men and women in their hopes for freedom and dignity. We especially praise the role played by non-violently protesting women.

Stay tuned to hear more about their stories, which will be disseminated over the coming months in our #CivicPride series across our communications channels and in our annual Activizenship report!