Missions Publiques interviews Alexandrina Najmowicz:
« To rehabilitate European democracy, we must build on the bonds that bring us together” 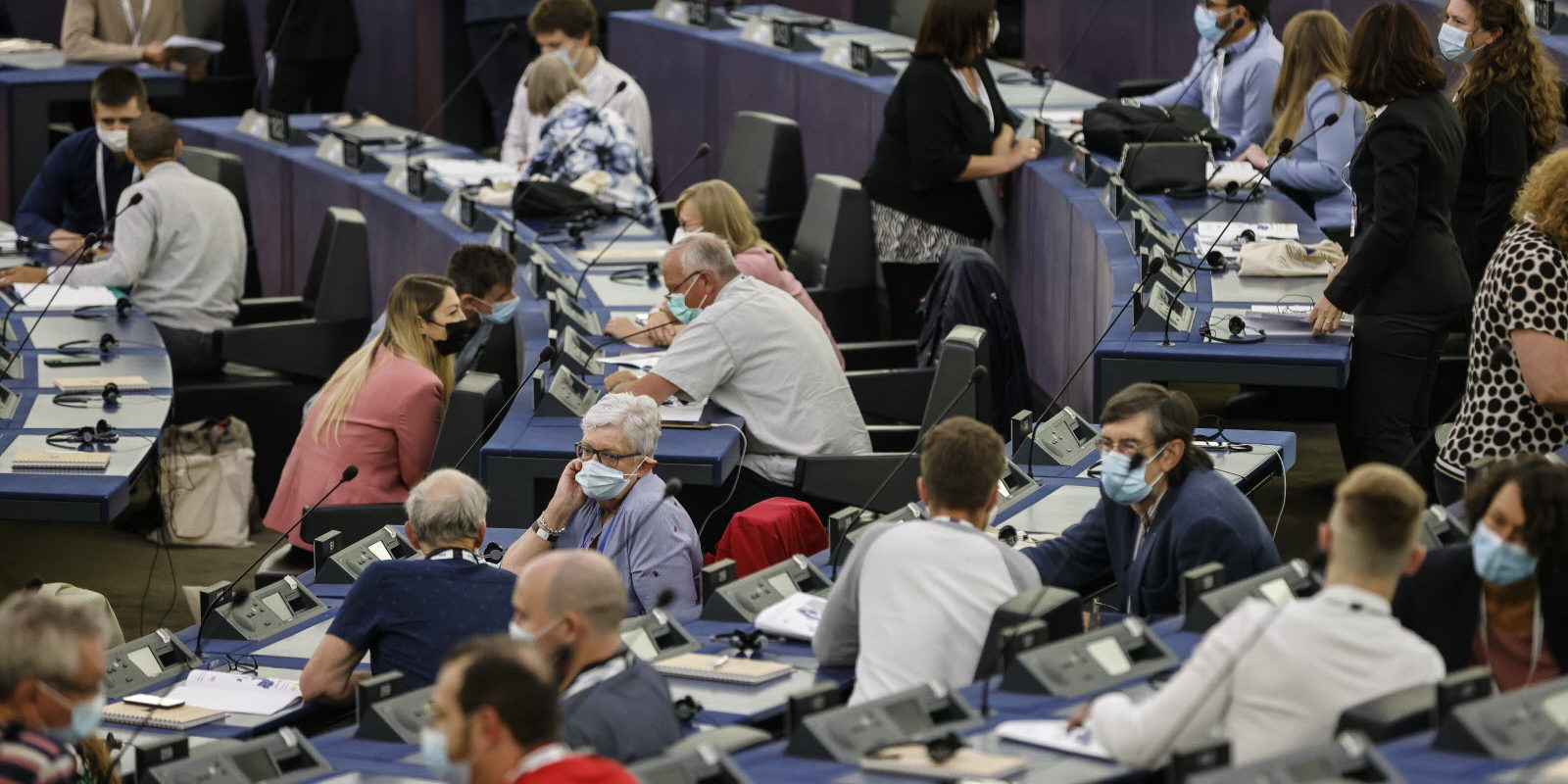 In an interview for Missions Publiques, CSOs Convention co-chair Alexandrina Najmowicz exposed the role of CSOs in the Conference on the Future of Europe, but also the democratic crisis, which the Conference is only partially addressing. We have reproduced the full interview below.

Alexandrina Najmowicz is the Secretary General of the European Civic Forum (FCE), a network that brings together more than a hundred associations and NGOs across 27 European countries. Co-chair of the Civil Convention on the Future of Europe, she explains the ambitions and challenges of the ECF and the role of civil society organizations in the Conference on the Future of Europe.

One of the objectives of the European Civic Forum is to build a real European civil dialogue, a prerequisite for a civic and popular appropriation of European issues. What are the main challenges (and difficulties) of the ECF?

Since its creation in 2005, the European Civic Forum strives to promote an environment conducive to the engagement of civic actors in the public sphere and community life, to support the structuring and creation of European civil society alliances in all sectors and to foster institutional dialogue at the European level. Among our main achievements, we have succeeded in maintaining and expanding a strong and diverse network of associations, linking different forms of organizing and activism, ranging from large federations of associations deeply rooted in local constituencies, to national NGO platforms bringing together hundreds of thousands of NGOs from different sectors, to human rights organizations, to civic and social movements, but also to small groups working at community level or engaging with the public on local issues. We claim and struggle to maintain a political role in advocating for a society based on our shared values of equality, solidarity, democracy and inclusion.

In terms of institutional dialogue, we have initiated and are very active in Civil Society Europe, the permanent coordination of European civil society working on cross-cutting and common issues across all sectors and engaging in dialogue with the European institutions. It is not always easy to be recognized by the institutions, and it certainly takes two to tango… But in the last few years, we have managed, collectively, to give more visibility to the sector and its needs in the EU agenda: adding civic space and civil dialogue in the mandate of the European Commission’s vice president for values and transparency; putting civic space and freedoms on the radar of rule of law monitoring mechanisms; increasing the budget of European programs, including CERV – Citizenship, Equality, Rights and Values. With the increase in this budget, the EU now has more capacity to support grassroots organizations that defend democracy, the rule of law and fundamental rights at the local level.

For several years, there has been a rise in populism around the world and in Europe. In some countries, we are even witnessing a decline in democracy. How do you explain this? What are the levers of the FCE to move the lines and encourage civil dialogue?

We are facing a major and repeated crisis of the EU: its founding values are threatened first by European policies that do not adequately respond to social needs, then by populist responses. We see the strong emergence of nationalist and authoritarian political offers, especially in Central and South-Eastern Europe, but also in Western countries. In recent years, we have seen increasing pressure on democratic checks and balances and the rule of law in many European countries. This translates into pressure on associations and social movements, especially those that are vocal and critical of their governments’ policies.

The space for civil society to criticize and hold governing authorities accountable is shrinking, along with legislation to silence NGOs as opponents or “foreign agents,” government control over the distribution of funds, cuts in public funding for NGOs, etc. Our recent initiative – Civic Space Watch – brings together resources on threats to civic space and fundamental rights, as well as positive initiatives, including those aimed at countering these threats. Launched in early 2018, the platform brings together nearly 800 resources from local, national and European organizations in 26 EU countries. Based on this information, we publish an annual report – Activizenship – that informs policymakers and the general public about these transformations within civil society and work to trigger institutional actions to protect our space.

In relation to the retraction of the #LexNGO in Hungary, the organizations called on the Hungarian government to conduct a meaningful consultation with relevant stakeholders (including civil society organizations) before passing this law. What was the involvement of the ECF?

We have been mobilized to support our Hungarian colleagues since the very moment they were confronted with the Orban government’s attacks, back in 2017 with the adoption of the “Lex ONG” , designed to silence independent and critical voices. We wrote letters to the European institutions and the Orban government, we mobilized in front of Hungarian embassies across Europe, but most importantly, we tried to connect and organize solidarity with actors on the ground.  Following an infringement procedure by the European Commission and the landmark ruling by the European Court of Justice, the Hungarian government finally decided to repeal the law. This is an important development for affected civil society organizations, as it ends four years of damaging stigma. Since 2017, the LexNGO has been a symbol of the abuse of power. Its retraction is an important development – but Hungarian associations warn that real change could only be achieved with a change in the attitude of the ruling power towards civil society. Some provisions of the new bill are also worrying. The title of the law (“on transparency of civil society organizations capable of influencing public life”) is in itself misleading. In a healthy democracy, public discourse is shaped by free and active citizens – we all have the right and responsibility to address the problems and issues that affect us.

The challenges we face across Europe when it comes to recognizing freedom of association are not only a feature of authoritarian regimes and anti-liberal governments. If we look within the European sphere, we can see in the lack of structured implementation of Art. 11 of the EU Treaty on Civil Dialogue a denial of the right of association: it seems to make no particular difference or added value to the EU institutions when citizens associate and organize across borders to express their views in the policy-making process.

This lack of recognition has become even more visible and problematic when it comes to the Conference on the Future of Europe, its decision-making process and its functioning. The intergovernmental conference preparing the constitutional treaty in 2000 involved European networks of civil society organizations through a Civil Society Forum, and representatives of the latter were regularly invited to the conference. Twenty years later, the role of intermediary civic organizations has taken a back seat, as the EU plans to engage in a deliberative exercise by addressing European citizens directly and individually. This exercise is necessary, but it must not be limited to institutional populism and public relations, which will ultimately lead to an inevitable increase in mistrust of European and national institutions. The conference must not only set an ambitious agenda and ensure genuine civic engagement, but also lead to decisions followed by concrete actions.

In a self-organized Civil Society Convention, we bring together more than 75 European civil society networks and platforms with constituencies across Europe, uniting millions of citizens active in all areas of life, from education to culture, social inclusion, environment, health, governance and transparency. We decided to bring our folding chairs and occupy the democratic debate. We self-organized long before the institutional process was launched and we committed ourselves to carry the legacy of our mobilization beyond the close of the institutional process. Democracy, solidarity, equality and inclusion are our compass and we will strive to rally all the drivers of our societies to make tomorrow better than yesterday.

As part of #CoFoE, citizen Panels will work on several themes including democracy in Europe. What do you expect from the institutions on this subject?

The participation of organized civil society as a channel of mediation is crucial in this regard. At a time when civil society is on the front line in trying to mitigate the disastrous costs of the crisis, we continue to believe that a structured civil dialogue with all civil society actors, in all its social and economic components, is a fundamental element of European democracy.

Unfortunately, when we look at the institutional process and all the careful negotiations about empowering citizens to bring about change, the prospects for reinvigorating European democracy from this deliberative process are not very optimistic. But our role as organized civil society is to keep the stakes high. To rehabilitate democracy and disarm those who attack it, it is necessary to constantly build on the bonds that bring us together in an inclusive way. The potential of all these different forms of engagement to revive democracy depends on the ability and willingness of institutions to recognize and support them, to engage in dialogue, and to take into account their contribution.