The European Civic Days this year brought us to Belgrade, spotting positive examples of civic mobilisations from Central and Eastern Europe and the Balkans, illustrating the values we share, tapping into their potential for developing counter narratives in a regional context where people are particularly confronted with a deep disillusionment with the transitional promise of democratic consolidation and economic prosperity after the fall of the iron curtain.

In recent years, a new face of Eastern Europe burst into the spotlight, dyed with walls, barber wires, revival of nationalism and identity politics pushed by authoritarian, antidemocratic regimes. In the same time, mistrust in political institutions and representatives has sparked into new forms of civic protest and resistance, claiming values that go against those regressive discourses and policies.

What are the possible drivers to keep authoritarianism at bay and build a convincing progressive perspective? How can fights against nationalist, xenophobic and antidemocratic authoritarianism converge and feed the broad perspective of a wider fight against the current EU integration model mostly based on competition of all against all with constantly shrinking solidarity policies? These were the questions the conference tried to address “with the pessimism of reason and the optimism of will”.

FOR LIBERAL STATE THE BELL TOLLS

The scary monster at the periphery

As Vedran Dzihic from the Austrian Institute of International Affairs pointed from the outset, the “end of history” premise that former totalitarian regimes would irreversibly walk towards democracy along the embracement of liberal economy turned to be wrong. He holds that the socio-economic situation partly accounts for this, as the promise of welfare state for all was not fulfilled within the neoliberal restructuring of the societies, which led to deep cleavages between different parts of the population, with wide precariat deprived of socio-economic rights and new neoliberal clientelistic elites. Secondly, the normativity along liberal values, freedoms and rights that was part of the European agenda has been weakened by the internal crisis of the role model itself. Against this background, we witness the emergence of new forms of governmentality especially at this periphery of Europe, based on rhetorical adjustments to democracy, which are well described by Michael Ignatieff (President of Central European University – CEU) as “nationalist in ideology, authoritarian in politics and capitalist in economy”. Dzihic deplores that the European Union plays the role of a “dead man walking” and has not proved efficient so far in addressing these challenges, due to its failure to respond to social needs and the pragmatism of its policy in the region, choosing to externalise responsibility for democratic change to local communities and civil society while supporting local authoritarian leaders for the sake of stability and security (see here his more in-depth analysis of the “authoritarian code”).

If we look at Hungary as one of the most emblematic cases of this new form of “chameleon regimes” in between democracy and authoritarianism, a letter from Prime Minister Orban in response to Civil Society Europe concerns about recent measures against “foreign funded” NGOs or the “Soros funded” Central European University stands as a good example of rhetorical adjustments. 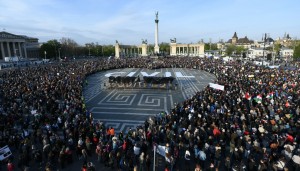 Dora Papp from Kretakor Foundation in Hungary confirms that the wording used by Mr Orban shows perfectly the patterns employed by the government in the name of transparency, national security or antiterrorism, to silence down criticism, especially coming from civil society, currently the only voice for opposition to the authoritarian government. She outlined the crucial role civil society has to play in this context, as key actor to mobilise and organise resistance on the streets but also, on the long run, to build critical thinking inside the society, as “politics became part of our lives”.

It is indeed worrying to see that raising illiberalism is a contagious phenomenon in Central and South-eastern Europe, as Filip Pazderski from the Polish Institute of Public Affairs avowed. Poland has been experiencing as well a long way to democratization and for him the lack of political literacy combined with the lack of trust in democratic institutions partly explains why the current ruling party could so easily install its regime and dismantle the rule of law and basic freedoms. But on the other side of the coin, previous economic policies which left many behind account as well for the situation.

Klementyna Suchanow, one of the organisers of the Polish Women Strike who mobilised on 3rd October 2016 – the Black Monday – thousands of women (and men) across Poland against a ban on abortion, confirms how much the civic and democratic situation is deteriorating every day since the conservative party took office in October 2015. The battle against the abortion ban is won and the movement is being kept alive ever since, as she announced a civil disobedience action the same day (June 10th) in Poland alongside the official commemoration of victims of Smolenk plane crash, which became an expression of hate against government opponents and calls for international support and solidarity which is very much needed to keeping spirits up for mobilisations or in case of detention. She voices the need to build wide coalitions between social movements, activists and journalists to claim access to rights for all and to reveal and document the strategies and links between regressive, ultra conservative, religion-driven forces which are increasingly gaining ground in Europe and prove quite successful in implementing their conservative agendas.

The rise of this “conservative revolt” eroding not only democracy but also the secular character of the state, is yet another common feature of these regional contexts, as outlined by Claudiu Craciun, Romanian activist and founding member of Demos (Democracy and Solidarity) platform, which is the progressive stream of Romanian string of protests occurring in Romania since 2012 against austerity, corruption, for environmental protection or electoral rights. He draws up a complex picture of several cleavages inside the Romanian society that such kind of progressive movement needs to face, from the right / left cleavage, the authoritarian / antiauthoritarian cleavage and, more recently, the modernity / antimodernist cleavage, marked by the rise of conservative religious groups which became extremely vocal in mobilising social energies and putting pressure on political parties.  The recent platform for the defence of rights and liberties, called RESPECT, uniting more than 100 NGOs and activists, has been mainly created to fight against a proposal for constitutional referendum on defining marriage as a union between a woman and a man. Romanian authorities are also reproducing the different patterns of regional illiberal regimes and this is to be noticed in their attitudes towards critical NGOs, considered as “Soros agents” working against national interests. As revealed by Andrei Pop from the Civil Society Development Foundation, modification of the NGO legislation is currently in discussion, imposing harsh and discriminatory reporting obligations and forbidding criticism towards the political actors (see here the letter sent by a coalition of NGOs to Romanian government).

TO BE OR NOT TO BE POLITICAL?

This is a question for civil society!

While the concept of civil society is often manipulated in the context of electoral campaigns with new ways of doing politics that flourish on the detestation of politics, as we saw recently in France, or some time ago in Italy, a real question stemmed out of discussions, that is whether civil society should enter the political arena to change the rule of the game. There was a wide agreement among participants on the key role civil society plays in shaping political vision for open, democratic and inclusive societies where rights should be equally accessed and accessible to all. 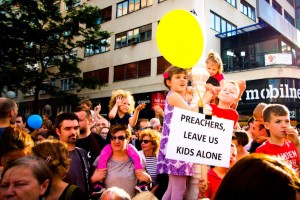 Marina Skrabalo from GONG and Solidarna, explains the biggest challenge for civil society in Croatia in deconstructing the taboo of the strict division between political and social activism, as it has been shaped during the “democratization agenda”. Considering the current educational challenges in Croatia and the constant battlefield between progressive forces and antimodernists and ultraconservatives which are strongly attacking the values of secularism, but also looking at how incompetent political elites have been recruited through political party structures so far, she considers high time to overcome this strict division between social and political spheres. Pointing at the tradition of trade union activism in western democracies such as France, Germany, or the UK, she deplores that currently the communication between social movements, NGOs and political parties is not working. Finally, she recalls the Croatia can do better campaign for educational reform when, for the first time in civil society activism, patriotism has been reclaimed by progressive activists against governmental vision for education consisting of “patriotic history”, literature conveying traditional and Christian virtues, and conservative sexual education.

HOW TO CHANGE THE POLITICAL?

Taking the debate forward, Vedran Dzihic concluded by pointing to current transformations of the political as such, in the age of post factuality, the permanent spectacle, the diminishing of institutions or the crisis of representation. To him, regardless of the various ways in which we could reach social and political change, from social mobilisations, NGOs action, policy work or electoral race, these different paths should be first of all values-oriented.

Values are not questionable and values-cantered discourse should be able to set clear fault lines and deconstruct the rhetorical adjustments. Secondly, there’s need to answer to the social question, as the promise of welfare which accompanied the promise of democracy along the perspective of European integration created enormous expectations on the side of the population, which were broken in Eastern Europe and the Balkans by political elites system of redistribution of public resources through clientelistic channels to gain hegemonic position.

And the EU will only represent an alternative when democracy will be reconciled with the social question. Finally, citing from Judith Butler, he suggests that reclaiming values and rights when democracy is being hijacked, must take the form of performativity, as a way of enacting democracy through joyful citizens’ agency and ownership of public space. Current social and citizens’ movements that are slowly reshaping the political venue may carry such kind of “real utopia” towards a “politics of joy”. 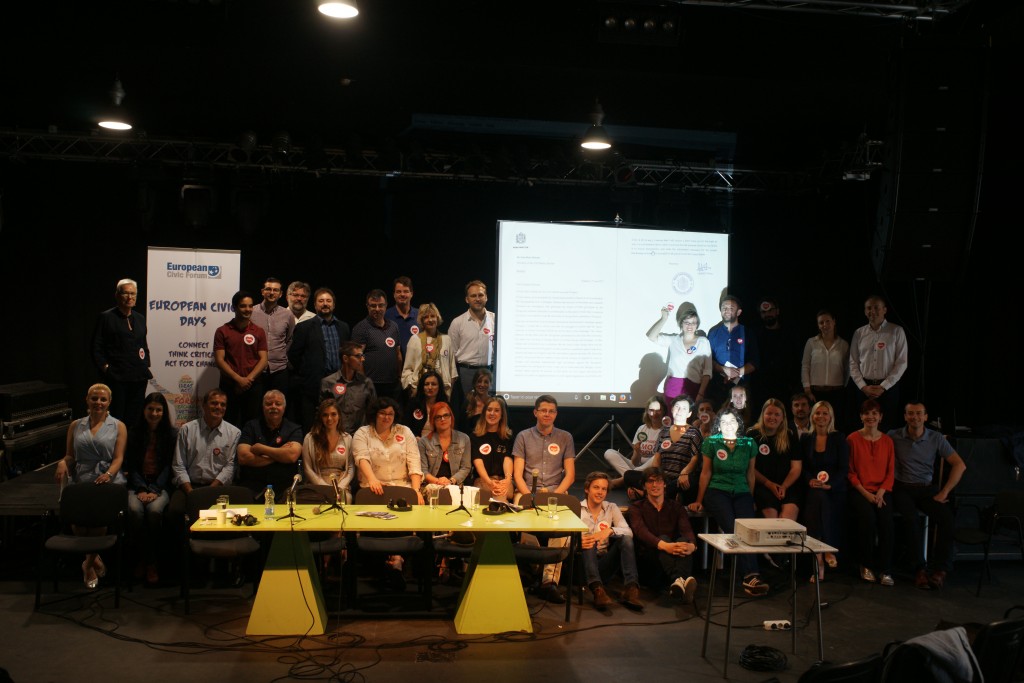