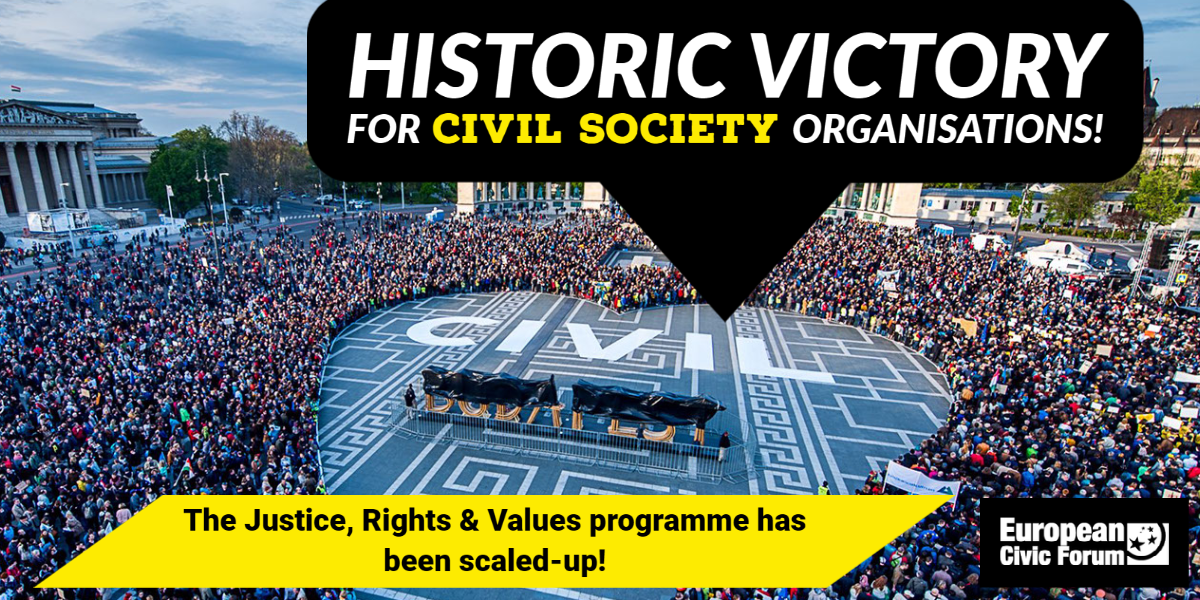 The European Parliament and the German Presidency of the Council of the EU clinched a deal on Tuesday 10 November, sealing months-long talks. The agreement foresees a significant increase in the budget for the Justice, Rights and Values programme, raising from 0.8 to €1.6 billion for the 2021-2027 period.

The European Civic Forum, together with the Batory Foundation (PL) and hundreds of civic organisations advocated earlier this summer for a budget that meets the ambitions of this programme, and provides meaningful support to civil society organisations promoting and protecting common European values of democracy, the rule of law and fundamental rights.

“This is a relief. After a sour victory in July, when we mobilised against an inexplicable 20% budget cut proposed by the Commission, we are particularly happy now to see this historic deal for civil society brokered by the European Parliament and the German EU Presidency”, commented ECF co-president Jean-Marc Roirant after the announcement. “Our open letter hit the right spot. We are thankful to all civic actors that raised voices with us and to the MEPs support in recognising CSOs as key pillars of our democracies”, added Raffaella Bolini, co-president of the ECF.

“thanks to the budget top up and a thorough revision of the Rights and Values regulation in 2019, the EU has now capacity to support grassroot organisations which cultivate democracy, rule of law and fundamental rights on local level. This is a big achievement of the EU and a great success of the civil society.”

Over the last years, sources of funding for CSOs became increasingly scarce – a process which accelerated with the outbreak of the pandemic and which will be analysed in the upcoming Civic Space Watch report 2020.

The announced agreement sends out a most welcome positive signal in these dark times, a long waited recognition of the role played by civil society actors in protecting and strengthening our core EU values.