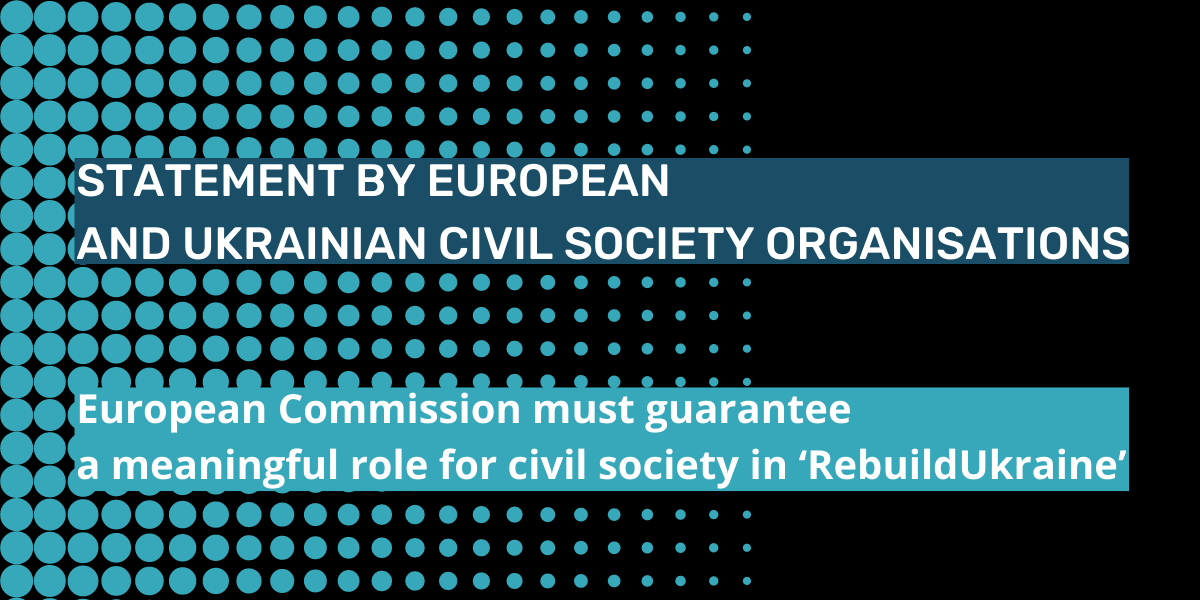 European civil society has been standing and continues to stand in solidarity with Ukraine and its people in the face of Russian aggression and the horrendous war. Russia must stop its aggression immediately and withdraw its troops from the entire territory. We hope that peace will soon return to Ukraine.

Civil society across the EU welcomes the agreement to grant Ukraine the status of candidate country for accession to the EU. European civil society organisations are ready to work with their members, partners and friends in Ukrainian civil society to reconstruct the country, to strengthen civil society and to ensure a strong, resilient, equitable and sustainable Ukraine.

Civil society organisations in Ukraine have been playing a crucial role since the start of the full-scale Russian invasion and escalation in February 2022. They have been central in providing humanitarian and medical assistance, helping those fleeing the country, documenting atrocities and war crimes, reporting environmental and cultural heritage destruction as well as organising the spread of independent information and access to vital services.

In May, the President of the European Commission, Ursula von der Leyen, announced ‘RebuildUkraine’, the platform for the reconstruction of Ukraine. ‘RebuildUkraine’ is led by both the Commission and the Ukrainian government with support from like-minded partners, such as EU countries and financial institutions.

The European Commission and its partners still need to pledge amounts for the reconstruction of Ukraine. The direct blow to Ukraine’s economy from the damage and destruction of buildings and infrastructure has been estimated to be well above $100 billion. While seized Russian assets may be used for reconstruction efforts, lawmakers have mentioned a possible EU contribution of 50-60 billion EUR.

It is not yet clear how the reconstruction funds will be distributed, and which conditions will apply. The Commission has stressed that reconstruction funds will be made conditional on reforms in line with Ukraine’s accession to EU membership. The Commission’s Communication from 18 May argues that rebuilding the country’s infrastructure and energy resilience must be in line with the most recent European policies and standards including all of the European Green Deal policies, strategies and initiatives (including the New European Bauhaus) and that the support for the recovery of Ukraine’s economy must promote a sustainable and inclusive economy contributing to the green transition of the country. It emphasises that the reconstruction funds aim at supporting Ukraine on its path towards good governance and the respect of the rule of law and human rights. Ukrainian civil society has been calling for the reconstruction of its country to be based on the principles of sustainable development.

A close involvement of non-governmental organisations, both on the EU and Ukrainian sides, will help increase the transparency and accountability of how EU public funds are distributed and spent. As civil society, we have relevant expertise to bring in, and must be able to play a watchdog role to ensure that investments in new infrastructure are aligned with the goals of the European Green Deal – in particular, the path to carbon neutrality and a zero-pollution environment, and that reconstructive is nature positive. It will also ensure that investments benefit all diverse groups in society, and primarily the most vulnerable groups including minorities and people with disabilities and taking into account the specific impacts of war on women. Civil society must have a clear role in defining priorities, planning and programming regarding long-term reconstruction measures, as well as being part of implementation and monitoring efforts. Furthermore, Ukrainian civil society organisations have been strongly active in providing support to fulfil the current needs and will be implementing some of the reconstruction measures on the ground which are being adopted. The expertise that Ukrainian civil society organisations possess and have gathered on the ground is fundamental to the success of the measures. Local and national CSO in Ukraine must be given a leading role in the efforts to build peace, to provide humanitarian assistance and in reconstructing their country. Finally, civil society organisations will also need clear financial support to be able to carry out their tasks of contributing to peacebuilding and reconstruction, service-delivery, acting as watchdogs and fighting corruption, also in view of the accession process of Ukraine to the EU. Strengthening civil society should be seen as an integral part of the reconstruction and accession processes.

This is also emphasised by the European Economic and Social Committee (EESC) who recently called for a strong role for both Ukrainian and European civil society in the reconstruction process to contribute to rule of law reforms, the fight against corruption and the green transition.

We call on the European Commission to:

European and Ukrainian civil society are ready to share their experience and to channel the voices of those active on the ground to contribute to the rapid reconstruction of Ukraine and to a bright future for a strong, democratic, resilient, equitable and sustainable Ukraine within the EU.

Edito – EU institutions and strengthening civic space: Giving with one hand and taking with the other?
2 novembre 2022